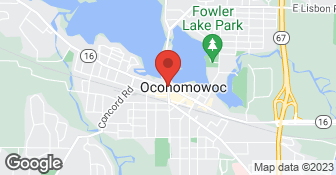 We are a hardworking, dedicated, self motivated team that would like to help with your project today! We always offer a free quote. Call us....

All American Landscaping prides itself on customer satisfaction. From start until finish, we work with you every step of the way. We specialize in a wide variety of retaining walls, garden edging, landscape lighting, ponds and other water features, outdoor living and patio areas and anything else you can think of! If we cannot do it, we will contract a reputable partner that can!

3 employees. No subs. Cost is determined by the job. Travel charges apply. Service fees apply. Extra charge for after hours service may apply. May contact through email. AAA approved. DBA - Deskalo Safe & Lock Co. Additional email - david.deskalo@hotmail.com. You can also reach me at (262) 744 - 9077.

DESCRIPTION OF WORK
Does my snow removal. Price varies on depth of snow.

DESCRIPTION OF WORK
I live on a lake and my house is located on a hill. I have had difficulties in the past getting people out to cut the grass at the bottom of the hill. When I had received a card in my mail box from DP's Lawn Care & Service I decided to hire them to do yard work. I explained to them that I did not want them to cut the grass at the bottom of the hill when they came out because there was some electrical issues and I did not want them to get shocked. I was standing looking out the window when they arrived and I watched a woman come out with a weed whacker cutting down the shoots of my lilacs. I ended up coming outside and asking her to stop, I then showed them where they could cut weeds. They ended up cutting down the forsynthia bush that my husband had planted 15 years ago. The stake was still there, but the black bungy chord that had been hold up the bush  was laying there and the bush had been completely cut down. A week later they came back and cut the grass down the hill even though I had previously warned them about electric shock. I spoke to them about the Forsynthia bush and they claim that I told them to cut it down. I explained that I had shown them the weeds specifically not a bush that was staked into the ground. They told me they would then wait for a check for the work while they sat in their car. They eventually left and have called me to tell me that if I don't give them their money they would charge me a late fee. I explained that I would pay $281.50 but withheld $50 for the Forsynthia bush they cut down. I sent them the check for $281.50. I had never previously received a contract, information about a late fees, or a list of any other fees. They have continued to harass me for the $50 even though I explained I will not pay them due to the damages of my Forsynthia bush.

Apparently this client figured out she was wrong about the situation. She paid her bill in full with a check in her name and for the full $331.50.