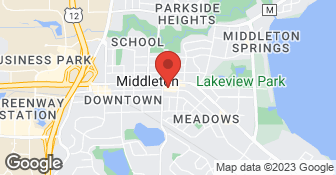 Since our founding in 1977, we have tried to make our company the most quality oriented, reliable, and innovative painting, staining, and restoration organization in the Madison area. Over the years, we have tried to incorporate excellent craftsmanship with a progressive approach to painting and restoration. Recognizing the need for a more intelligent, professional approach to residential and commercial painting, we set several guidelines in which to actualize the goal. They include: quality, value, and integrity. These guidelines have become the cornerstone of our operation and have allowed us to become a leader in our field.

Interior & Exterior Painting Power Washing Stain Decks Epoxy Garage & Basement Floors Spray Paint Siding Drywall Repairs COMMERCIAL - RESIDENTIAL There is a vast difference in quality that results from what is done before the paint is applied. We are a painting company that pays extra attention to the prep work details because we know from experience how important it is. All of our standard painting projects come with a written two year guarantee. These are our minimum guarantees and we are confident our work will last much longer than our warranty. As a policy, we do not cut corners to undercut our competition. We use top quality paints from Sherwin Williams.

DESCRIPTION OF WORK
We are using ANB Home Transitions for bathroom remodeling. They gave us a quote in December.

DESCRIPTION OF WORK
I called ANB from Florida for help with my parents' move within Madison. My parents are in their mid 70s and they were moving from a home on a large piece of property where they'd been for 25 years. They were my age when they moved in! They had done SOME sorting and packing, thanks to my two sisters located in the area, but in the end, they hadn't done enough. My parents are not (and have never been) very practical or organized. They're part of the "Depression" do-it-yourself generation. When their impending move was about 10 days away and I heard they hadn't hired professional movers--one of my sisters thought she could borrow a truck and recruit people and get the move done--I flipped out. I'm the bossy oldest child. I found Cathy & ANB by googling "moving services for seniors" + Madison. And thank goodness I did. She and her crew stepped into chaos and helped us make some sense of it. The first thing Cathy did was find movers with only about nine days' notice. Next, she helped me figure out which of ANB's services we might need. They wound up doing several hours of sorting, throwing stuff out, and packing over a few days. Then, Cathy helped me think about how the morning of the move should go. My parents were moving from a duplex, which they owned and lived in one side of, and their tenant was moving out on the same day at the same time. Cathy coordinated details like making sure each moving truck had enough room in the narrow driveway; getting the kitchen items over to the new place first thing and unpacking and organizing them with my mom; having her crew make small trips from the old place to the new (which was less than a mile away); and even waiting while a used book store calculated how much dozens of boxes of my fathers' books were worth. They even kept their cool while I lost mine on moving day, arguing with my dad over what constituted useless junk he'd hoarded in his garage for many years, versus actual items that should come to the new place--which is much smaller! I was so grateful for Cathy's help and coordination and planning. I do have two local sisters but one had to fly with her family to Europe on the very day of the move for her father-in-law's funeral. And the other was the one who thought she could manage it all herself by borrowing a truck and recruiting her husband and a couple others--just guys, not professional movers. [To this day, she thinks her plan would have worked. I think she's crazy.] All those sorts of issues--siblings disagreeing, not starting early enough to sort and pack the possessions of a lifetime, accommodating peccadilloes like my dad's books--Cathy and her crew took right in stride and did with grace. I thank them, and recommend them, resoundingly. It was so reassuring, such a relief, to be able to find and hire and communicate with Cathy from afar. And then great to meet her in person.

General Information
Free Estimates
No
Emergency Service
No
Warranties
No