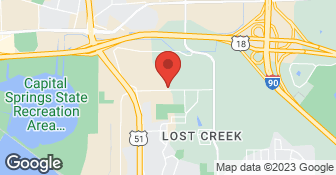 Very poorly. Showed over two hours late with no work order. Worked partial days or not at all, rarely showed at times stated. Poor communications with excuses for problems. Had to point out problems numerous times before they got it right. They ruined the canned lights by caulking around the outer edges and getting caulk all over ceiling. Lights had to replaced and painting done. Still not like it...

This is not a customer of enviro Tech Window Concepts.
F

DESCRIPTION OF WORK
1. They were to arrange for an energy audit to identify the principle places of unwanted air infiltration prior to       insulating/sealing the walls, roof and inner wall between garage and basement and ceiling of garage (ie. the floors of the 2 north       bedrooms which are above the garage).  2. They were to install 12 Simonton Reflections 5050 replacement windows (double paned with argon gas, low-E coating).       4 of the 12 were to replace our front picture windows. We requested that all of these 4 be aprox. 24" wide by 50" high.  We       requested the 2 outside sections be fixed in place, while the 2 center sections were to be the crank-out type for unrestricted       air  flow in the summer. 3.  They were to do a post improvements energy audit so that we would receive an aprox. $400 rebate from the Focus on Energy       program. For our part we were to make a $4,100 down payment and another $4,100 payment when the project was completed. We were also to pay the initial energy auditor $400 for the initial energy audit.

In response to Member's complaint: 1)We not only arranged the audit but paid in full the 3rd. party audit from an independant auditing company that does NOT work for Enviro-Tech Window Concepts. 2)We did install the windows as well as insulated Member's home(After another company refused the job dur to complexities of the process. 3)The windows that were requested were too large for Simonton to ma...
A

DESCRIPTION OF WORK
Mark was very professional and took pride in his work. It is now cold weather and we can definitely feel the improvement.

Great salesman, a gift for instilling confidence, promised to fix deficiencies when we refused to sign completion papers, but after signing the papers, that is the last we heard from them, they would not return phone calls or emails (got one email saying we'll be there the next week for the promised fix, they did not show up).

DESCRIPTION OF WORK
Update: Oct 21, 2012.  Resolved.  Envirotech returned and added additional insulation.  -------------------------------- Paid apparently above average costs for work with uncorrected defects.   Hired Envirotech in July to insulate our house.  It is now October and we are still waiting for EnviroTech to bring attic insulation up to contracted amount as required by the regional program regulator who found that to be an inspection deficiency that would need to be fixed.    (see photos of defects, corrected in some cases, ignored in others)

The work was begun in mid-May, and as of this writing (September 14) has not yet been completed. I am waiting for the new energy-efficient windows to be installed, and for the new wooden molding to be put in around the walls and ceilings in the rooms that were drywalled. The owner, Jason Radcliffe, gave me a good price on the total package in exchange for paying for the work in advance (in late Ma...

DESCRIPTION OF WORK
I used Enviro Tech Windows & Home Concepts for extensive insulation work in my home that included replacing paneling and ceilings with dry wall in four rooms, plus replacing the windows in one bedroom and in one bathroom. The insulation, dry wall and painting work has been completed, but the windows have not yet been installed, and new molding still needs to be put in the rooms that were drywalled.

General Information
Bonded
Yes
Insured
Yes
Free Estimates
Yes
Payment Options
MasterCard, Discover, Check, Visa, Financing Available
Senior Discount
10%
Emergency Service
No
Warranties
Yes
All statements concerning insurance, licenses, and bonds are informational only, and are self-reported. Since insurance, licenses and bonds can expire and can be cancelled, homeowners should always check such information for themselves. To find more licensing information for your state, visit our Find Licensing Requirements page.

A
1031 REVIEWS
Ecoview Windows of Madison