Primary Care - Internal Medicine
Primary Care - Family Medicine
Rehabilitation - Physical Therapy
Orthopedics - Hand & Wrist
Orthopedics
Hospitals - General
Licensing
All statements concerning insurance, licenses, and bonds are informational only, and are self-reported. Since insurance, licenses and bonds can expire and can be cancelled, homeowners should always check such information for themselves. To find more licensing information for your state, visit our Find Licensing Requirements page.
Business Details 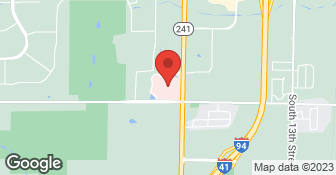 It is an excellent hospital.

Took a long time to get an appointment, office staff nice and confident with Dr.  Besides getting an ultrasound which appeared normal the only tests done was complete blood work up minus any testing of the thyroid functionality due to had a test 1 yr ago at another dr office which claimed was normal.  The entire reason I was sent to a specialist was for a more extensive testing to make sure that a...

They're very kind. They do a really nice job.

DESCRIPTION OF WORK
I went to Wheaton Franciscan Healthcare.

She was lucky it was just a hairline thing. They put a temporary cast on her about the 20th of November and she got the cast off two or three weeks later and they started doing physical therapy for all of December. At the first of the year, the therapists told her that she need to keep coming for therapy and she was not excited about it. The therapist told her that it would be covered by insurance...

DESCRIPTION OF WORK
My wife went to Wheaton Franciscan Healthcare- Franklin, Inc three years ago for a bone fracture treatment in her wrist.