A Rated | 72 Reviews
Request a Quote 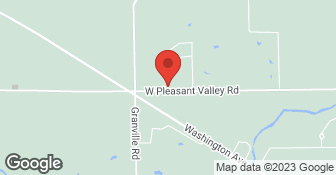 Mike and Bob both showed up on short notice, which saved our butts as we needed a quote right away. They listened to us and they explained what work was needed now and what work we could delay. We ended up selling the house before tackling this project, but we would have chosen Mike to do it. Mike's an old-school, pragmatic dude and he's a little short of lung but he seems to know his stuff.

Took time to get going but once they started things went okay until chips started to appear in April 2016 and now near the fence post we've had problems. Tried to contact Mike through email but have not received any reply.

Suffice it to say that the project never got done because of the concrete shortage.  My only complaint is that Mike was not the most responsive guy. I had to continually initiate contact and was never really made aware of what was happening and why the delay in pouring.  We will see what happens this next year and I will revisit this review.

DESCRIPTION OF WORK
This should really be an incomplete.  This company was recommended by a neighbor who thought  did good work.  We received a favorable quote in late August for a relatively small job.  The owner, Mike Dimmer, told me that he had some jobs lined up but hoped to get this done in 6 weeks give or take with the weather.

Was told at the time of the bid that it would be about 6-8 weeks depending on weather.  Suffice it to say, the patio never got poured.  The owner, Mike, was extremely unresponsive.  It took several calls, emails, prayers, before he'd respond.  The last contact was Mike telling me that concrete ran out and that he couldn't get to this job this year.  I know this was a small job - probably less than...

DESCRIPTION OF WORK
Was going to pour a patio.

Very nice family business! They got the job done quickly and it looks great!

DESCRIPTION OF WORK
They reset 25 feet of cap stone that was leaning toward the house in the front.

General Information
Bonded
Yes
Insured
Yes
Free Estimates
Yes
Payment Options
Check
Senior Discount
Ask for details
Emergency Service
No
Warranties
Ask for details
All statements concerning insurance, licenses, and bonds are informational only, and are self-reported. Since insurance, licenses and bonds can expire and can be cancelled, homeowners should always check such information for themselves. To find more licensing information for your state, visit our Find Licensing Requirements page.

A
7 REVIEWS
Over the Top Roofing & Construction