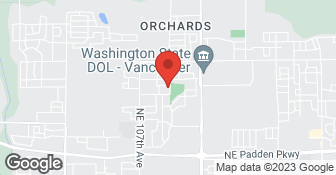 Large or small, all jobs are welcome! From planting to removal, treatments and stump removals, planning and permitting, let us help make your trees and plants healthy and beautiful for you and your environment. Estimator, Certified Arborist and Owner John Buttrell and his team can't wait to help you. Arborscape is fully staffed and equipped to help you with all your needs. Hard to reach and difficult jobs our our specialty. Give us a call and we can provide a free estimate....

We are proud earners of the Angie's List Super Service Award for the past 3 years. All Living Things offers a practical, natural approach to landscape management in the greater-Vancouver area. Our clients can feel at ease, knowing that their projects are good for the environment. Whether you are looking a one-time cleanup, or long-term maintenance, we can accommodate your needs. Please give us a call today!

It went very well. We had thorough discussions with the arborist about what needed to be done. We made adjustments to fit our budget. The crew that showed up (3 men) was very industrious and careful. The job was set up and budgeted for 3 days, but they accomplished everything in one day; that fact affected my evaluation of the pricing, which was probably a bit high. The crew left the worksite in r...

The tree removal and trimming went quite well. The crew showed up on time, were fast and efficient and cleaned up everything nicely before they left. The big dead tree is gone and the two others that were trimmed look much better. I'm quite happy with Arborscape and believe I got a good value for my money. I would hire Arborscape again and would recommend them to friends.

DESCRIPTION OF WORK
Cut down a large dead fir tree, flush cut the stump and removed the brush and chips. They also trimmed two other large fir trees and removed all the debris.

Not good. We came home to find that the fence had been damaged after the tree trimming. Nobody had contacted us to let us know about the damage. We had to reach out and ask for the damage to be repaired. The person sent to repair the fence wrecked his truck into our neighbor's fence taking out a large section including 4 posts. The same person that destroyed the fence came out to replace it. The p...

DESCRIPTION OF WORK
Large fir tree needed to be trimmed.

Upon arriving the two men and I talked about what I wanted done and what Matt had suggested to thin and balance the tree.  They soon went to work pruning and rebalancing the tree so that one side branch wasn't bearing too much weight.  It didn't take them long to do the job after which they came to the door to check with me about how well the work was performed.  I should add that they did a great...

DESCRIPTION OF WORK
Arborscape pruned an approximately 30 feet elm in our front yard.

I had worked with Arborscape in the past when they trimmed some trees on my son's rental property.  I was comfortable with the work they performed at that time and so had no hesitation on using them for our own home.  Matt came to provide an estimate the same day we called.  He was friendly, quick and professional.  After speaking with our neighbor we decided to go ahead and have the work done.  I...

DESCRIPTION OF WORK
Trimmed two trees from our neighbors yard that were overflowing into our yard.