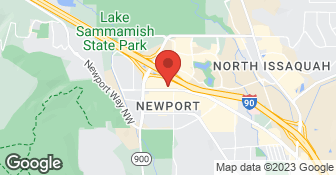 We have been designing and building custom deck projects in King County for over 21 years. We specialize in using manufactured decking products such as Timbertech, Fiberon, Azek and Trex. But, we also work with Cedar and natural wood products. Contractor's #WESTCCD905DU. We did business as Decks by JRW for 20 years and changed our name only to make it more recognizable. Our previous contractor's #DECKSJR099QG. Additional DBA - R J R Inc. Award Winning....

We have over five years of experience in all of your landscaping needs including yard cleanup, sod installation, leaf removal, lawn maintenance, landscaping, wall retaining, fencing and much more! Customer service is our top priority. No matter how small or large your job may be, we will be sure to impress you! Give us a call for more information and a FREE estimate! (425) 345-3251 or (425) 583-5676

Specializing new construction framing, decks, porches, siding, and patios. We have the experience and dedication to bring your dreams to reality! We guarantee your satisfaction, and we won’t leave until the job is done right. Call or click to schedule a free estimate today!

We are your one stop shop for all your deck needs! Give us a call for your free quote today!

As a landscape architect and general contractor, I have recommended West Coast Decks on all of my deck projects over the last few years. Ron Spillers and his team will surprise you with their unparalleled service that includes a prompt site visit and accurate estimate for your deck, as well as a competitively priced package that includes your deck plan and all of the permitting necessary. You can ...

DESCRIPTION OF WORK
We coordinated a deck with West Coast Decks

WCD just completed building my new deck, nearly 6 months after I contacted them. Their nonexistent communication and lack of response to my status inquires was beyond anything I have ever experienced (and I have dealt with a lot of remodel contractors). The final product and good and the crew was great but that doesn't offset the extremely poor customer service. The final inspection was scheduled ...

Disappointing. Clearly stated on the phone we needed a new railing, flooring and screened deck. It wasn’t a major job so we wanted to be clear. Service person showed up promptly took pictures and said he would send an estimate in a couple of days. An estimate was never sent and when we called to inquire they said they didn’t really do the work we wanted.

I hired West Coast Decks in late February/early March 2018. The engineering for the deck didn't complete until May 10th and the permit wasn't submitted until May 30th. I constantly had to contact them to find out status and usually didn't receive a response until I contacted them multiple times. My goal was for the deck to be completed by summer so we could use it. However, I felt I had to keep on...

Great! We interviewed three companies and Ron Spillers, at West Coast Decks, was highly professional and the most informative and helpful. He came in person to give us a bid which really impressed us. He gave us good information early in the bid process so we could adhere to building codes. We compared several products and selected a composite deck and new railing system. Ron offered advice about ...

DESCRIPTION OF WORK
Our old deck needed to be redesigned and completely rebuilt.