Water and Smoke Damage
Mold Testing and Remediation
Air Duct Cleaning
Septic Systems
Insulation
Carpet Cleaning
Licensing
Bonded
Insured
All statements concerning insurance, licenses, and bonds are informational only, and are self-reported. Since insurance, licenses and bonds can expire and can be cancelled, homeowners should always check such information for themselves. To find more licensing information for your state, visit our Find Licensing Requirements page.
Business Details 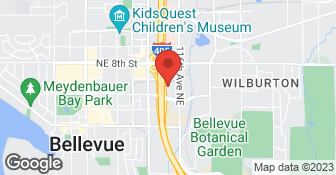 911 Restoration of Bellevue is a full-scale water damage cleanup restoration company offering you peace of mind after a disaster. We provide water damage restoration, sanitization, mold removal, fire & smoke damage, reconstruction and everything in between with 24/7 availability. Take precautionary actions during the coronavirus. Our techs are trained to sanitize and clean your property with disinfection solutions and follow CDC and EPA protocols. Disasters can happen anytime due to pipe bursts, flood damage, roof leaks, storm damage or other water damage-related emergencies. Fortunately, our IICRC-certified techs will rapidly respond within 45 minutes to handle any water related emergency and help minimize damage. ...

Angie's List Super Service Award winner 12-years Running! From quote to completion in as little as three days, and guaranteed to pass inspection the first time. Founded in 2001, we have completed over 70,000 jobs in the last 18 years. Clean Crawls is your go-to company for Crawl Space Cleaning and Insulation, Attic Cleaning and Insulation, Mold Remediation, Rodent Exclusion, Vapor Barrier Removal and Replacement, Prescriptive Air and Duct Sealing, and Affordable Payment Options. Clean Crawls offers an industry-leading 10 Year Workmanship Warranty that is transferable to new homeowners. Call now 877-722-0791 Visit us at CleanCrawls.com

Madrona Insulation seeks to provide home improvement and energy-saving solutions for existing homes in a socially responsible way. Properly insulating your home will conserve energy and lower your heating and cooling costs. It will be quieter and more comfortable. We offer a variety of insulation and weatherization services for Seattle, Tacoma and Bellevue, Washington, in King, Pierce and Snohomish Counties. DBA Madrona Home Services LLC

Mike Smith, the 911 Restoration rep, came out within an hour of me calling - that was good.  However, he was wearing a dress shirt and tie.  I thought that was odd because how can you go down into the crawl space to look at the water source and damage in that attire?  He said that he would have his workers go down there to take a look "later."  Anyway, I tell him that I learned about the problem f...

DESCRIPTION OF WORK
I contacted 911 Restoration because I had water damage in my crawlspace. 911 replaced some insulation and some of the crawl space moisture barrier.  Since 911 did this work without first correcting the source of the leak, making all of their work moot.

Pros: Response was excellent.  We called at about 9:30PM and they were there as advertised within 45 minutes.  In about 3 hours they had a collapsed ceiling removed, and water extracted from the carpets.  A big relief.  In the following 5 more workdays my only complaint was that on one day they started late and finished early, but that was minor. The workers that came worked very hard, took reason...

DESCRIPTION OF WORK
Cleanup after a flood caused by a failed water supply line fitting.

First thing they didn't use a contract, I actually had to ask multiple times for a contract and eventually, I had to summarize all the work in an email and made them replying to this email. I am glad I did that, because there were few times were they said that they shouldn't have done something but ended up doing it because it was written down.   They mentioned the work will take 21 days and it to...