Auto Service
Auto Radiators
Auto Tires
Auto Mufflers
Licensing
Insured
All statements concerning insurance, licenses, and bonds are informational only, and are self-reported. Since insurance, licenses and bonds can expire and can be cancelled, homeowners should always check such information for themselves. To find more licensing information for your state, visit our Find Licensing Requirements page.
Business Details 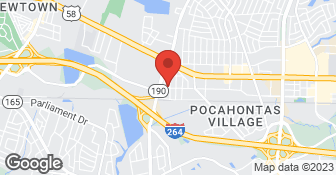 Family owned & operated Integrity Car Care & Tires should be your first choice for quality and dependable automotive services and tire sales. Our warranty is 36 Month/ Unlimited Miles. We accept most major credit cards, ARI, and GE Capital Financing. We offer a Defender's Discount to all Military, Police & Firefighters (active duty or retired with valid ID)....

Japanese Auto Masters was founded in 1982 by Tommy and Cindi Potter in a small building shop close to the Virginia Beach oceanfront. Tommy originated Japanese Auto Masters to address the needs of consumers driving Japanese-made vehicles at a time when there were no independent repair service centers that specialized exclusively in all Japanese makes and models. The only available option for the repair of Japanese automobiles was high-priced dealerships. Our customers wanted alternatives. With this in mind, Tom set about creating the premier independent full-service shop catering to the owners of Japanese and Asian-made vehicles right here in Virginia Beach. In recent years Japanese Auto Masters has evolved to include maintenance and service to Ford, GM & Chrysler vehicles as well. Tom and Cindi are both lifelong residents of Virginia Beach who continue to own and operate the business today. Japanese Auto Masters was built on integrity, trust and quality ~ words that are evident in all we do; from our Service Advisors, Parts Department and Clerical Staff to our highly-skilled ASE Technicians. You will find courteous, helpful people and a warm friendly atmosphere that welcomes you each and every time you visit. Stop by even if it’s just to see our facility and meet our staff. We look forward to serving you soon.

I dropped the car off and was told that they would get to it on Thursday, which was when the parts would be there. Well, Thursday passes and a couple more days go by and no one calls me. I call them up and find out that they never got to it because the parts didn't show up when they were suppose to so they had to reschedule the work. After that time passes I have to call again and find out that th...

DESCRIPTION OF WORK
They replaced a connector in my steering column and a problem with my ignition key switch.

I called to get a state inspection and I was told if I could bring it in within 30 minutes they could do the inspection. After arriving, the car was taken in within about 15 minutes of arrival and the mechanic spent a lot of time checking the car over. When the mechanic finished he returned the inspection sheet to the completed bin. but it took some time for someone to process me out. The phones w...

Always very polite and never tried to and quot;overselland quot; extra services when I would take my car in. I used them over the last couple of years and found them to be knowledgable and helpful. I woud recommend them to my friends, family and co-workers.

The service gent, Dave, showed up on time, assessed the work to be done and completed same in a short period of time to my complete satisfaction. Based upon estimates from various dealers the work was well within reason and somewhat cheaper than all estimates. I have used these providers at least three times in the past to my complete satisfaction.

DESCRIPTION OF WORK
Removed multiple dents from vehicle without any damage to paint and requiring no additional body work.

We service and repair all makes and models of domestic and import vehicles. We are your logical alternative to the dealership for all scheduled maintenance of your personal vehicle, or fleet car or truck. We service: Engine-Transmission Repair/Replacement, Check Engine Light, Brakes, Steering & Suspension, Heating & A/C, Belts & Hoses, Electrical Problems, Fuel Systems, State Inspections, Towing and we offer a courtesy one way shuttle within 10miles of the shop.