Fireplaces
Gas Logs
Natural Gas Lines
Plumbing
Gas Grills
Licensing
Bonded
Insured
All statements concerning insurance, licenses, and bonds are informational only, and are self-reported. Since insurance, licenses and bonds can expire and can be cancelled, homeowners should always check such information for themselves. To find more licensing information for your state, visit our Find Licensing Requirements page.
Business Details 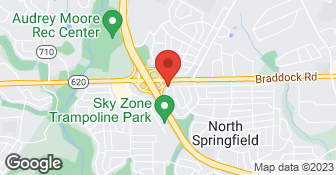 Our company is family owned and operated. Floyd R. Jones ll Master Gas fitter and owner of Gas Fireplaces Plus has over 17 years of experience in the industry working exclusively on most gas and propane makes and models. Before creating Gas Fireplaces Plus, Floyd worked for some of the largest fireplaces service companies in Northern Virginia...

We are small business, dedicated to giving high quality service at an affordable price. We are known for our quality work and the integrity of our business. We look forward to building long term relationships with our clients, and guarantee your satisfaction.

If you're looking for a high quality, professional HVAC, chimney or fireplace company, you've come to the right place. Our experienced technicians have served the Northern Virginia since 1999. We offer the best in the Heating & Air Conditioning as System Installations, Repairs, Service Agreements, IAQ Products, and more! Licensed and Insured, 24/7 Emergency.

Steve Swerdlin was born in 1961 and was raised mostly in the Maryland area He attended college at University of Maryland, College Park where he met his future wife Laura. Steve was a pre-med major but decided it wasn’t for him. He then tried to follow in his family’s footsteps and go into the jewelry business but wasn’t happy there either. Laura then suggested he try his hand at something else, maybe a trade of some sort. Knowing he had the potential to eventually start his own business and make it on his own, Steve decided to try his hand in the plumbing industry. Steve began an apprenticeship where he learned as much as he could about his new trade. After years of study and achieving the level of Master Plumber, Steve was very frustrated with his surroundings and decided to branch out and start his own company. With a very worried yet supportive wife by his side, Steve started “Plumbing Works” in 1995 as a full service plumbing company out of his home. Shortly after the company began, Steve installed his first gas fireplace and loved it. The finished product and the thought of the joy his customers would get from using their fireplaces had him hooked. Steve redirected his path from plumbing to gas fireplaces and other gas work. Tired of snaking drains and fixing broken toilets, he decided if he could make a living just doing fireplaces, generators, grills and other gas piping, that was what he would do. With his wife and 2 children by his side, Steve the Fireplace Guy was born in 2003. Voted #1 for Super Service in 2012 and 2013 on Angie’s List, Steve strives to maintain the best service and care to each of his customers. Steve maintains his own small company with the goal of giving top-notch quality with his own dedicated staff of installers and service mechanics as well as his loving wife, still by his side, who assists Steve behind the scenes with the company.

The tech showed up and was able to fix the problem. That another service provider could not do.

I called to make an appointment on 12/2/19 and was told the first available appointment was 2/1/2020. 2 months! I said I was surprised and then was told a bit rudely that it was their busy time and "what did I expect?"

They came in and did a very thorough job cleaning and servicing both of our fireplacea. Both fireplaces now appear refreshed and are working well for the winter. When we had a minor switch/wiring issue afterwards, Floyd came back and took care of it for us. Responsible and professional, would hire again.

Floyd was awesome! Prompt, professional service. Pricing was fair and well explained. Will definitely use them again and recommend to my Real Estate clients & friends.

Rep arrived on time and did the job according to the estimate!

we do not sell propane.