Concrete Pouring and Repair
Pavers and Hardscaping
Landscaping
Drain Pipe Installation
Excavating
Licensing
Insured
All statements concerning insurance, licenses, and bonds are informational only, and are self-reported. Since insurance, licenses and bonds can expire and can be cancelled, homeowners should always check such information for themselves. To find more licensing information for your state, visit our Find Licensing Requirements page.
Business Details 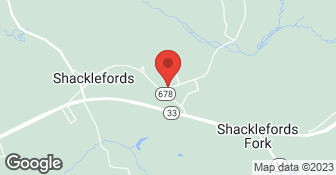 Owner operated. Three employees. Subs used on occasion for larger concrete work. Charges are determined by the job. No travel or service charges. After hours and emergency services available, additional charges may apply. Ask for details....

We are a mid sized construction company, specializing in concrete construction. We also do grading, retaining walls, drainage and hardscape. Feel free to call anytime to setup an estimate.

WHILE HE WAS INITIALLY COOPERATIVE, HIS PERFORMANCE CREATED SOME PROBLEMS. THE ELECTRICAL HAD TO BE PUT ON THE OUTSIDE WALL BECAUSE HE DID NOT PLACE THE PIPE CORRECTLY IN THE CEMENT NEAR THE INSIDE WALL, WATER IS LEAKING UNDER THE DOOR AS THE WALKWAY IS HIGHER THAN THE SLAB FOR THE GARAGE. HE HAS BEEN ASKED 3 TIMES TO COME FIX. NO SHOW.

DESCRIPTION OF WORK
I HAD AN AREA CLEARED AND SLAB FOR A GARAGE COMPLETED.

I never received a call. Finally, at around seven o' clock I called the provider who acted very out of it and quite clueless as to my identity, but finally said, and quot;Oh, I guess I was supposed to meet with you this eveningand quot;. When I said yes, he responded with the same lame excuse I have actually heard a number of times from other providers , and quot;I had a truck break down todayand ...

DESCRIPTION OF WORK
I contacted this provider on 10/03 regarding an appointment to price a new driveway for my home. I caught this provider on the road and unable to take my contact information, so by agreement I texted this to him after setting a meeting date and approximate time of "around five" for 10/06. On 10/06 I was home all day and as five o'clock approached and passed I awaited the call I had been promised letting me know the provider was on his way.

Great! They were on time every day and did exactly what they said they would. Over and above on the details to make sure everything was perfect.

All three projects went quite well, with the 1st project in the fall of 2011 being the simplest, and the last one on re-setting all the pavers in the front courtyard the most difficult. Work exceeded our expectations in terms of quality, and the work was done for the quoted amount in spite of added difficulty in several aspects of the jobs that added to the difficulty. We worked with Chad in sched...

DESCRIPTION OF WORK
Chad did 3 different jobs over the course of 6 months: concrete removal and planting of landscaping in its place; installing a storm water drain in our driveway to prevent flooding of our courtyard; and re-setting the courtyard pavers on a concrete slab that was sloped to prevent any ponding of water.