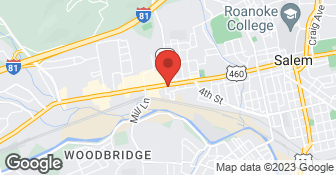 I was so pleased to deal with Joe on the phone, since I'm in NC and my son was in Va., this was my only means of communicating with him.  He was very knowledgeable and helpful. Our experience with AAMCO on Main St.  in Salem Virginia  was easy and light on the pocket. I will use them again and again. My son's car has problems. Joe took the car in performed a multi-point inspection and came up with...

DESCRIPTION OF WORK
AAMCO said they would check out (and had worked on VW's) my 4-speed VW manual transmission in a 74' Karmann Ghia (old Bug/Beetle transmission) that I was converting to electric for the REEVA club.  When I convert I always have the used tranny checked out before mating up the new motor.  They said they would verify it for $200-$400 so I took out the used but working transmission to them on salem,VA main street June 23rd, 2011.   A few days later I get a call from their Blacksburg location saying it was sent over there since Salem didn't have the tools/experitise to work on old Beetle transmissions and it would be $1200 and where to get replacement synchros/seals since they were worn from use.  I found online Long Enterprises who blue UPS'd the parts to AAMCO for $438. On July 8th, Friday about 3 weeks later I get a call from the Salem location saying to pick up the tranny, that it's done.  I come over and they hand me a cardboard box of 100's of little tiny parts and a clump of gears!  They couldn't figure out how to put it back together again.  It looked like a child tore it appart.  I went around to 3 other transmission shops and they said they couldn't fix AAMCO's mess either, that probably some of the small parts were missing.  I checked online on the evlist and others with transmissions in Texas, Florida and California had similar fates.  I mailed a letter to Horsham PA headquarter on why they're hiring low paid unqualified  people to take apart transmissions but got no reply (similar to others who wrote in I found out later).