Electrical
Plumbing
Generator
Drain Cleaning
Licensing
Licensed
Insured
All statements concerning insurance, licenses, and bonds are informational only, and are self-reported. Since insurance, licenses and bonds can expire and can be cancelled, homeowners should always check such information for themselves. To find more licensing information for your state, visit our Find Licensing Requirements page.
Business Details 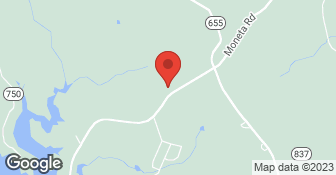 We are a locally owned and operated company that values honesty and integrity and treats your home or business as if it were our own. We offer a variety of electrical services and plumbing services that are customizable to each individual project. We pride ourselves on the quality of our work as well as our commitment to outstanding results. We look forward to building lasting relationships and guarantee your satisfaction! We are located in Moneta, Virginia. Thank you....

With years of experience serving the area, we are your solution for all your electrical needs. We take great pride in our extreme professionalism, timeliness and superior customer service on every job. We make sure to develop a lasting relationship so that the next time service is needed there will be no question on who to call. Check out our 5 star reviews from happy customers! Call us today so we can discuss your needs and make a plan that fits your budget. Satisfaction guaranteed!

We offer Straight Forward Pricing! Our Electricians are Background Checked and Drug Tested for your Safety and Peace Of Mind! Our Vans are like a Warehouse On Wheels to Save You Time!

Wooldridge Heating Air Electrical is Central Virginia's Largest Residential Service provider and winner of the Angie's List Super Service Award,Voted best of by Lynchburg's Reader's Choice , & Lynchburg Business Magazine! We specialize in residential install & service of American Standard & RUUD HVAC equipment as well as Generac Standby Generators with a full service and maintenance department to maintain and keep your systems up and running ! We have been serving our area since September 1973! We would love to take care of you and keep your home comfortable, please feel free to contact us!

We have used Moser a few times in the past and have been very happy with the work. Most recently, we were having issues with a few ceiling fans whose remotes were not working. We called Moser and they came out promptly, checked the fans, and found the issue was the receiver in both fans. He told us we needed to replace the receivers -- something they could do, but the receivers would have to be or...

The quality of work was very good. My biggest complaint was the price. He quoted me a price of $199 and at that price I thought it was going to be quite an endeavor and take about 2 - 3 hours to do. He did the work in about 1 hour and 15 minutes. I asked why the price was so high for such a short period of time. and was told they don't quote by the hour, but have a set price for each type of job t...

the guys were great... rather than walking through the house, they wanted to enter the basement from the basement door. they did great work and cleaned up when they were done

DESCRIPTION OF WORK
Our septic pump alarm was going off and we found the breaker was popped, but it would not reset. I called and they came out within a few hours and diagnosed it quickly as a nail that had over time worked it way through the wiring insulation causing the wire to arch. They corrected the issue quickly and professionally.

Everything went fine. Appointment date kept and completed work in 1 day. Spent some time educated me on how the system works.

I had some fits and starts trying to get hold of them. I left a message the Weds or Thurs before Easter and never heard back from them. Called back on the 17th and got an appointment set up for the 19th between 8-10AM. They showed up just under the wire at about 9:58, Told me what they needed to do to fix this. At this point I'm already out $49 for a "service charge". After about half an hour they...

DESCRIPTION OF WORK
I needed a ballast replaced for a 4-bulb fluorescent light fixture.