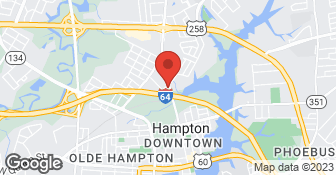 Cut 'Em Down Tree Service in Hampton, VA is a private company categorized under Ornamental Shrub and Tree Services. It was established in 2008....

We provide safe and cost effective tree and stump removal services. If you need emergency services, our team of tree service professionals are available 24 hours a day, 7 days a week. Walt's Tree and Stump Removal believes in performing top quality work for our customers. We provide competitive pricing, and prompt attention to detail. We take pride in our work and cause as little disturbance to your property as possible. Licensed and insured/workman's comp.

Call us today to let us take care of all of your Tree Service and Landscaping needs. (Winter Cleanup Specials offered) We offer the most competitive pricing in the market and we pride ourselves in having the best customer service in town. Let us improve your curb appeal today!

They never contacted me. so I hired someone else.

The crew should of came out Sept 8,2017 at 11 and no one showed up. We called and he said they were coming and no one ever showed up. Sunday the guy called and said he was coming out that he had to go to the hospital. We said okay! All day Sunday we waited and again no one showed up! Monday, Tues Wed and Thur, my husband spoke to the man and he said he was coming in 1 hour! NO Show again. Well at ...

DESCRIPTION OF WORK
Cut a tree down

DESCRIPTION OF WORK
Cut down and hauled away one very large river birch. Ground out stump.

This company is AMAZING! I would recommend these guys to anyone. We asked for estimate, cut em down provided it within a day, we excepted the quote, and they arranged a time to come out and showed on time. They removed the fence, which we were informed of ahead of time, set it aside, moved lawn furniture and bird baths that i forgot to move. They were extremely respectful of my property. Due to th...

I called, no response until 9 days later. Appointment set for estimate. They didn't show. When I called the company the and quot;ownerand quot; answered. He stated that they had overbooked the estimator. When I inquired as to why I was not notified, the owner hours on this tammany I about who many kids he has, much his business is worth. The customer service was just poor, especially if this was i...

DESCRIPTION OF WORK
No service was provided

She didn't understand it was raining therefore its caused a delay other clients are worried about walking areas while bad weather is going on.We than should up and she was not clear what she wanted than was talking about her using illegal drugs!Once estimator heard this he immediately gave her a price a left respectfully.We do not tolerate any drugs at CUT'EM DOWN TREE SERVICE>