Flooring Sales and Installation
Hardwood Flooring Sales and Installation
Licensing
Bonded
Insured
All statements concerning insurance, licenses, and bonds are informational only, and are self-reported. Since insurance, licenses and bonds can expire and can be cancelled, homeowners should always check such information for themselves. To find more licensing information for your state, visit our Find Licensing Requirements page.
Business Details 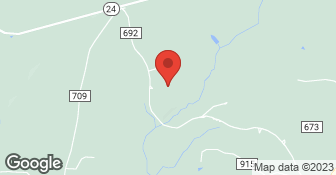 I am a Historic Restoration Specialist and a MasterCraft Floor Sander with 40 Years of Experience. I do use the best equipment available. I Specialize in QUALITY WORKMANSHIP. I also specialist in Customer Satisfaction on ALL JOBS THAT ARE SCHEDULED, STARTED AND COMPLETED! I will not let one report by a disgrunteled lawyer ruin my reputation, when we declinded his work!!! Looking for a Great Job on your floors, check out my website, call me and I will give you a Free Estimate. Book the job for Customer Satisfaction....

Carr's Floor Sanding Co is locally owned and operated, serving Lynchburg for over 30 years. We are committed to excellence in every aspect of our business. We uphold a standard of integrity bound by fairness, honesty, and personal responsibility. Our distinction is the quality of service we bring to our customers. Accurate knowledge of our trade combined with ability is what makes us true professionals. Above all, we are watchful of our customer’s interests, and make their concerns the basis of our business.

DESCRIPTION OF WORK
I hired Kidd's to refinish some floors in my house several years ago, i did not realize I could leave a review on Angie's List until now. it was a fair price. I was concerned about the dust and when I asked the owner, he said the dust would not be bad, well that turned out to be horribly incorrect, as I was in the house working while the floors were being sanded and the dust was so bad that I was not able to see but a couple of feet in front of me, so I yelled for the owners brother to stop sanding. once he finally stopped I asked why the dust was so bad and he told me he did not have an attachment to the vacuum so he was sanding with no vacuum at all! I was also told they would putty and sand any nails holes and such in the floor, well they were going to put down the final coat of clear when I finally told them they needed to do it, so they did it and put the final coat of clear on over the putty immediately after filling and sanding. I wanted to take a look at the floors after the clear coat had dried before I paid to make sure the floors looked good and there was no damage to anything as I could not walk across the floors to go up stairs and look. Well a few minutes after the work was done the owner called and was yelling and cussing saying I was trying to not pay and he would take me to court, I explained to him that I wanted to walk across the floors and look before I paid because after I paid it was too late, and he just continued to yell and cuss. He told me if I didn't include the one day late fee that he would reject the payment and file charges at the court house the next day. The work was they did was acceptable but that guys attitude was awful.

it started out fine with the owner coming over for an estimate. He was very agreeable and said he would do the floors during the week we were away. We then got an contract in the mail from his wife who runs the back office of the business. The contract didn't say what products were to be used (only "a water based finish"), it left out an add on that was discussed with her husband, and called for a...

You are a lawyer and have proven how good of a liar that you are. Your job was declined by this company because you did not like the wording on the contract that you had received. You had also refused to pay a deposit. We were never hired to do your job because we declinded this job due to your attitude, which we have a right to decline any job that we wish. No money was ever exchanged between you...