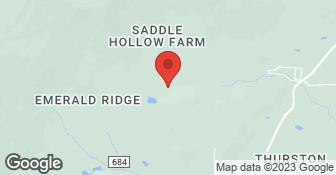 A small 50 years of operations local family owned business. We do complete home remodeling and home repairs. We are insured and licensed....

My grandfather, Salem M. Eways, came to the United States as a Stone Mason. In the late 1920s, he began selling fine textiles door-to-door in New York City, until he and his brother found an opportunity to earn money cleaning and repairing rugs. With dedication and hard work, they built the business and eventually grew into 4 stores in the Pennsylvania region. Salem then moved to Charlottesville in the early 1960s and opened a store named Salem M. Eways Oriental Rugs, located in University shopping center on Old Ivy Rd. After the passing of my grandfather, my father, Frank S. Eways, a state trooper in Pennsylvania at the time, left his job and moved his family to Charlottesville to take care of the family business. He eventually moved the store to Emmet St. across from Bodo’s Bagels, where he then grew the business to one of the largest sellers of oriental rugs in the United States in the mid-1970s. Eventually all of the Eways brothers joined together to become one of the largest and most respected flooring companies in the region. For over 85 years, and three generations, the Eways family has been providing the finest area rugs, rug care and maintenance. We have reached the world to bring you the best quality rugs available. Come visit our showroom to see the best selection of antique, traditional, and contemporary rugs in the area. Additional emails - franksr@ewaysrugs.com, adam@ewaysrugs.com. Award winning. Also serving Nelson, Rappahannock, Richmond, Roanoke, Roanoke City, Rockingham, Cumberland, Fluvanna, Bath, Charlottesville City, Goochland, Scott & Shenandoah Counties.

Window Depot is not your typical window replacement company! We pride ourselves on offering the greatest selection of replacement windows, vinyl siding, entry doors, patio doors, and options available in our markets - including vinyl, composite, and wood - from several manufacturers. Whether you are looking for economy, premium, or anything in between, we can help. We provide honest, unbiased education and advice to help you choose the products that will work best for you and your family. We are proud to offer Vinyl, Composite and Wood windows with more standard features, Triple Pane at Dual Pane prices, a Lifetime Warranty, and an honest and ethical approach to doing business. From your initial contact with our company through the successful completion of your project and beyond, our goal is to provide you with the very best home improvement experience possible. We are committed to building and maintaining positive, long-term relationships. We have built our name and reputation on providing honest advice, quality products, professional installation, and exceptional service. If you are not satisfied, we are not satisfied. Instead of a transactional sales process, we believe in providing a two-way educational opportunity. Our consultations begin with questions to better understand your needs and objectives. Then we educate you on the various products and services available that will meet your needs. And finally, we help you select the most appropriate product(s) for your home and budget. The last thing you need is high-pressure sales tactics, gimmicks, or intimidation to coerce you into buying something that you don’t need, or at a time when you are not ready. Our partnership with one of the nation’s largest home improvement networks provides us with significant buying power, allowing us to pass along tremendous savings to our customers without sacrificing quality. And we back it up with the service and craftsmanship of a locally owned and operated business.

Renewal by Andersen replacement windows are not only built for beauty, they're built for performance, too. Made from Renewal by Andersen's exclusive Fibrex material, this breakthrough composite combines the strength & stability of wood with the low-maintenance features of vinyl replacement windows. We are on company that handles everything from start to finish & we offer one of the best limited warranties which even covers installation. We've installed over 2 million windows in more than 300,000 homes - we're the experts you can trust. What to expect from your free In-Home Consultation: Renewal by Andersen custom-builds all replacement windows and replacement doors according to your home's exact needs. In order to provide accurate window and door pricing, a design consultant will meet with you in your home to discuss your replacement needs and provide you with pricing information. Specific-Time Appointments - We schedule window and door appointments at specific times, 6pm as an example, rather than a window of time such as 4pm - 8pm. No Pressure - We'll listen to your needs and present ideas to help improve the home you love. Custom Assessment - Every home is different. We will inspect your home's current window situation, identify any unique installation challenges and provide you with an accurate assessment and potential solutions. Options - Our replacement window and door specialists will provide you with both beautiful design options as well as efficient ways to make the most of your money. An Itemized Quote - During your consultation, we will provide you with an itemized quote that will allow you the opportunity to review your options and make the best decision for your home. No Obligation - Your free, in-home consultation is provided to you with no obligation.

We have worked with Doug and his sons on a number of projects over many years. Each of these craftsmen are skilled and knowledgeable about all aspects of building and home repair. They take pride in their work, make good suggestions and maintain high standards. One area that did not turn out as expected was immediately redone without discussion. The quality of their work is outstanding. Descriptio...

DESCRIPTION OF WORK
Their handymen are incredible, I've used them for several projects around the house.

If I have a difficult job to do, I know Doug will do it right!

DESCRIPTION OF WORK
He's been assisting me with ongoing projects for the past 30 years. He's helped me repair and restore practially everything in the house. He's an expert in essentially all areas of construction and restoration. He's particularly a master in masonry!

They do very good work, clean and tidy and as far as getting it is by finshing by a deadline they are on top of things. They are very professional, pleasant and honest. Their communication is good and always check in at every stage of the process. The quality of their work matches their price which is superior to other companies in the area.

DESCRIPTION OF WORK
We have been using them now for over twenty years and they have remodeled my kitchen, added a sun room, painted numerous room, hung doors that were falling off,  and recently installed a brand new water heater within our home.