Electrical
Earthquake Retrofitting
Phone Wiring
Generator
General Remodeling
Licensing
Bonded
Insured
All statements concerning insurance, licenses, and bonds are informational only, and are self-reported. Since insurance, licenses and bonds can expire and can be cancelled, homeowners should always check such information for themselves. To find more licensing information for your state, visit our Find Licensing Requirements page.
Business Details 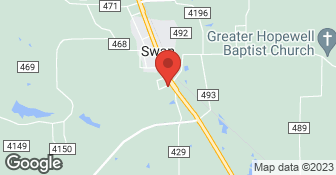 We are a full service Electrical Contracting Firm. We offer 24 Hour Emergency Service. We offer full home backup generators. We offer full home automation. Commercial, Residential, New Construction and Remodels give us a call for your next project. You won't be disappointed!...

We have the experience and dedication to bring your dreams to reality! Specializing in home theater systems and TV mounting. We guarantee your satisfaction and we won’t leave until the job is done right. We pride ourselves on the quality work we provide, while delivering great customer service! Check out our services offered and call or click to schedule a free estimate today!

DESCRIPTION OF WORK
Helped with repairs to a 1955 reach home with a DC system. They were knowledgeable, friendly and provided quality service. I will use them again!

The technician arrived exactally as per schedule.  He was neat and clean and well mannered.  We reviewed the installation and he listened intently to how I wanted the job done.  He worked very effectively and quickly, cleaned up after himself, and then took considerable time to explain the operation of the switch and how it works.  He was done in much less time than he had estimated, and charged m...

DESCRIPTION OF WORK
Installed a transfer switch for my generator.

John is absolutely the BEST electrician I've ever used. He dropped a phone line that AT&T couldn't do and it works great. He has added/relocated outlets thoughout the house. He cut several holes in my drywall (with my permission) and afterward he replaced the drywall and screwed it in. All it needs now is to be taped and bedded and it will be ready for the room to be repainted by my contractor.  H...

DESCRIPTION OF WORK
Jon added/relocated several electrical outlets, moved a ceiling fan, installed a new chandelier where no connection previously existed and dropped a phone line in my new office. He returns this Friday to move my dryer 220 plug and relocate another outlet to the backside of the wall and inspect my electrical panel and possibly replace if needed.

It went great. Jon is very busy, but was able to get the work done on relatively short notice. His quote was clear and his prices were fair. He did an excellent job installing outlets in two bathrooms under very tight constraints (space-wise). The quality of the work is great. He also installed smoke detectors, changed out an antiquated fan switch and explained the low-voltage power system used to...

DESCRIPTION OF WORK
Jon provided a quote and then performed the electrical work at a mid-century ranch style home we had just purchased in advance of move-in. Jon installed smoke detectors in all bedrooms and the hallways, installed two GFCI outlets in the bathrooms, troubleshot an issue with the carport lighting and installed a motion detector style light.

I contacted Jon (the owner of Alston electric) to install a new chandelier we purchased for our foyer and to trouble shoot a light switch that was malfunctioning and becoming hot to the touch. He asked appropriate questions about height of area where the chandelier and said he would need to get a 16-foot step ladder. He scheduled come out to do the work a week from the time I called. He was 10 min...

DESCRIPTION OF WORK
I called Jon to repair a triple-throw light switch that was malfunctioning, replace a switch that became burning hot to touch, and install a chandelier in 2 story foyer.