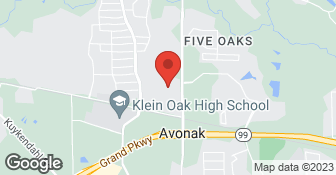 Hi! We are a A+ BBB Company, 5 Stars on Google and 4.67 Starts on Home Advisor. Recently decided to re-invest in Angie's List. We promise a great experience, fair prices and excellent service. Please give us a chance! Breathe easy again with our superior heating, cooling, and indoor air quality control services! Aire Serv® has been a nationally trusted name for maintenance and repair services for all heating and cooling systems. Our expert technicians know that we aren’t just fixing your heater or AC system—we’re ensuring your comfort—which is why we always go above and beyond for our customers. We even offer emergency services, so you can trust we’ll be there when you need us. Request an appointment today to experience the Aire Serv difference.

A/C & Heating Service by Tracy is proud to offer honest A/C and Heating services to the greater Houston area and all surrounding areas in South East Texas. Our company was founded by Mr. Tracy James on the principle of giving hard working people honest pricing in their time of need and treating them with respect. Mr. James knows how hard we all work for our money and he wants to keep Texas families comfortable at an affordable price. Our technicians are uniformed professionals who take great pride in doing it right the first time. Mr. James would have it no other way. We are able to respond to most calls in just a few hours in most cases and always in less than 24 hours. There is never an extra charge for calls in the evening or on weekends. That's just the way Mr. James operates. Not only will our technicians show up on time, fix it right, and leave your home just as tidy as they found it, they will take the time to educate you about what's going on with your system. Many of our customers send us notes thanking us for taking the time to explain their A/C and Heating issues and how we corrected the problem. Mr. James believes an educated customer is a confident customer. And a confident customer can sleep at night. That's what helps us sleep at night too. Give us a call today!

I use Northland for my home HVAC. My unit stopped cooling and I called to see about having it serviced. I was asked what actions I had taken and told them that I had shut it off fearing damage. They asked me to turn it back on and see if it was cooling which I did to find that it was. They explained to me that the system has safety mechanisms for protection from further damage and that it wasn’t u...

DESCRIPTION OF WORK
Parts have been replaced multiple times when it breaks. They do not over charge and help find the least expensive route to go for the a/c repair. They are the only ones who we call for a/c work since we have lived here the past 12 years.

DESCRIPTION OF WORK
Our AC failed, it had had problems earlier in the year and a different contractor had pumped up the system, I had him back when the system failed, and he told me the compressor had seized, and a new system was required. I got an alternate quote from Northland, because they were personally recommended by my wife's colleague. They confirmed the other contractor's analysis, quoted me on a complete system, and when I showed them the other contractor's price, agreed to match it. They were able to start promptly on the job, were clean, laying dustsheets in the house, tidy, prompt, and polite. I would have no qualms in recommending them to any of my neighbours. I'm very pleased with the job done.

It went very well. The technician was quick and thorough. The system checked okay and we are good to go. We used this company a few years ago when our A/C system stopped working. The same technician responded back then and and found the fan motor on the outside unit was bad. What was unexpected was that he checked and said the motor was still under parts warranty so all we had to pay was the labor...

DESCRIPTION OF WORK
Replaced a unit.