Tree Service
Lawn and Yard Work
Licensing
No License Required for Trade
Insured
All statements concerning insurance, licenses, and bonds are informational only, and are self-reported. Since insurance, licenses and bonds can expire and can be cancelled, homeowners should always check such information for themselves. To find more licensing information for your state, visit our Find Licensing Requirements page.
Business Details 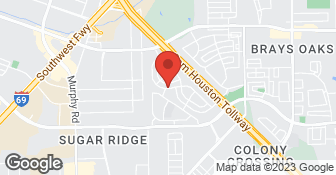 Specialist Tree Service in Houston, TX is a licensed and insured company that offers tree services to residential and commercial areas. Jesse and Henry Brothers are experts on trees and specialists in satisfied customers. We have been in the business since 1981....

Madrono Tree Services was started in 1989 and is owned and operated by Phillip R Coker. He is a graduate of La Porte HS (TX) and has a B.Sc. from TAMU/College Station. His major areas of study were arboriculture and parks/ natural resource management. Phil is an ISA (International Society of Arboriculture) Certified Arborist (# PN-0100A) and is a member of both the Texas Chapter ISA (ISAT) and the International ISA (# 1872).

Since 1985, our goal has been to ensure the complete satisfaction of every customer or client, while offering knowledgeable and friendly service at affordable and competitive rates. We know that you have a choice of other tree services in the area and we appreciate your consideration. Our hope is that you'll feel confident in our ability to meet all of your expectations and know that our customers are always our number one priority.

We scheduled an appointment to meet for the estimate and they arrived on time and walked the job and asked questions to get a thorough understanding of my preferences and the work to be done. The work was scheduled and the professional crew arrived as scheduled. They were skillful and well equipped to do the job. The work was done efficiently and they left the property clean and tidy. Great job.

DESCRIPTION OF WORK
They pruned six mature trees that were badly overgrown.

Did great until the fee came along. Never again. As far as I am concerned a deal is a deal. With just one hours work, I do not even pay money for a lawyer's work, not $750 per hour. There could have been at least other times for work over the next months work, but never again will I work for specialist Tree Service.

DESCRIPTION OF WORK
Asked to cut three limbs on three trees in my backyard to clear away the roof. The quote was for $325, thought was a little high, but oh well. The two man crew came right on time at 9:00am and started to work. They cut three limbs, about 2.5 to 3 in limbs and trimmed a few of the small branches about 1 in over less. They were finished within the hour including all of the cleanup, very nice. After about 4:00pm the owner came by and asked How did we do on the trees and I said they were great. Then he demanded $750 and I said what!!! The owner said we did this and that and the limbs were done and I told him no!. Basicly, the owner hassled me about the fee and finally told him he can take $500 and I'll go away. The owner took the $500 cash and left.

The crew showed up on time and well equipped. The job and clean up were complete in about an hour and a half. They were responsive to my requests and worked efficiently. I am very satisfied with the services provided.

DESCRIPTION OF WORK
Trimmed 2 large trees in back yard

I have a rent house located literally around the corner from the address listed for this company.  There is a large tree in the back yard with a couple of large branches that extend out over the roof of the house.  There was a third, but a few weeks ago, heavy winds broke it off and it fell onto the roof, creating a hole that pierced the roof. I called Specialist to see if someone could go by the ...

DESCRIPTION OF WORK
Absolutely nothing but waste my time

They did a super job and were polite, but there was a small communication problem.