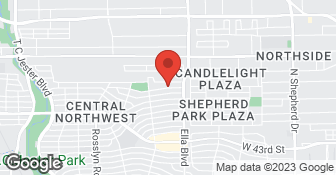 All Over Exterior, Inc.

All Over Exterior Inc. is a full service residential and commercial roofing contractor serving Houston, TX and the surrounding areas. We are a locally owned and operated business. We specialize in residential and commercial roofing, re-roofing, siding, and all related products. We pride ourselves on providing quality service at a reasonable price. We provide written warranty on material and workmanship. So let us help you with all your roofing or related services. All Over Exterior Inc understand that by choosing us as your partner in your reconstruction project, you have entrusted us with a great deal of responsibility.

Family owned and operated by a Navy veteran who has spent 25 years working on major projects, construction and operations. Building our business on integrity and quality.

​“Where Honesty and Integrity still have a home.” For a free quote or general information, please feel free to contact us.

They did a really good job, they were quick and efficient. Estimate was right on the money, no hidden costs. I would use them again, and I probably will.

DESCRIPTION OF WORK
Replaced roof on house built in 1949 (about 900 sq. ft) and installed roof vent.

I thought Serna Brothers did good, quality work. I liked that they got it done when they said they would and that they cleaned up after the job.

DESCRIPTION OF WORK
I used Serna Brothers to put in a new roof.

Tony Serna cam with another guy and had to use a 40ft ladder to reach my roof. He found the source of the leaks, took pictures, and gave me a fair estimate. he explanied in detail what he was going to do. He was the 3rd estimate - he was not cheapest but based on his explanation and throughness I felt comfrotable to use him. I have been taken advantage of in the past and was concerned about the wo...

DESCRIPTION OF WORK
Check source of leaks from roof

See above for details. I think that they are honest people, but I can't really use them as they do not have insurance for their workers. Tony Serna was very polite and was responsive. His suggestion was that I file myself for the roofing permit and have them (Serna Bros Roofing) as my workers. I did NOT think this is a reasonable idea as I am then liable for any problems on my roof (for insurance ...

DESCRIPTION OF WORK
They installed a temporary roof for me 2 days after Ike. They also gave me an estimate for a new roof. I would say that their estimate was a fair one. It was $100 higher than an estimate that I had done some 10 months previously for the roof when I thought I had a leak (other estimate was from another company highly rated on Angie's list). They called 2 weeks after the storm, ready to re-roof, but they cannot do the job as they were not able to file for a permit in City of West U as they did not have insurance.