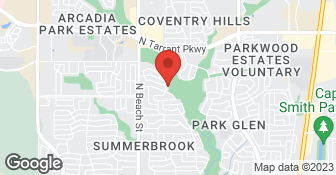 Bosque Roofing LLC is trusted to restore, repair, or build any damaged roof, siding and gutters for residential, new construction, and commercial properties. Bosque Roofing LLC is a top-tier provider of premium roofing services for homeowners throughout Texas & New Mexico. Our award-winning team brings more than 30 years of industry experience to each and every project. We’re proud of our achievements, but we deliver a lot more than flawless workmanship and high-performance products! Our entire staff truly cares about our customers—a fact you’ll notice from the moment you decide to hire us for your roofing project.

A full service residential roofing company, providing quality roofing solutions for the DFW area since 1981. Super Service Award for the past 11 years. As a locally owned and operated company, our goal is to make the whole roofing process from educating, providing the estimate, to advise concerning the insurance claim, to job completion as painless as possible. + Our core values are integrity, quality and friendliness. + Free Written Estimates. + Assistance with Insurance. + Warranty.

If you were in the line of the storm we can help! Phones answered 24/7. Please call 972-596-8313 to schedule your FREE ESTIMATE. Established 1981 and serving DFW with distinction and integrity for over 38 years. Locally owned and operated, we are proud of our work as commercial and residential roofing leaders. Our commitment is simple: setting new standards of quality, integrity, customer service, expertise and value. We can handle any and all of your roofing needs and are GAF Master Elite certified roofing contractors, an honor held by only 3% of roofers nation wide. You can trust us to help you with everything from roofing repairs to installing the most elaborate roofing products and styles. We are sure you are going to love working with us and we know we will love working with you. Give us a call for a FREE ESTIMATE and experience the Swan Difference. While our office hours are 8:00-5:00, our phones are answered 24/7, to always be available when you need service.

Contacted Mario through Angie's List and he came the next day to give us an estimate for the job. We decided to go with A & M Construction and Roofing. The crew arrived on time and work began. The job turned out to be move involved than we originally thought. Mario and his crew did a wonderful job at a reasonable price. Mario took and shared many pictures of the damage both before and after the wo...

DESCRIPTION OF WORK
Roof leak around chimney and down valley.

This morning’s roof leak inspection by “A&M Construction & Roofing” “Senior Roof Inspector” (Mario Armendarez) came at 9:30AM rather than our agreed upon 10AM time. (He had called 40 minutes earlier to confirm a 10 to 10:30AM arrival.) When I greeted him at the door he was unhappy that “the homeowner” wasn’t present even though I told him that during our initial phone call. Unfortunately by the ti...

DESCRIPTION OF WORK
A leak in our roof caused me to look up roofers on Angie’s list on Sunday, 8/23/18. Three companies were listed. Mario Armendarez called nearly instantly on Sunday and scheduled an inspection appointment for Monday AM.

Mario and his team went above and beyond what they were initially hired to do. They fixed our roof as needed but that didn't completely fix the problem so Mario worked hard to find the problem and did stone repair, insulating, and sheetrock repair. He refused to rest until the problem was completely and permanently fixed. I have complete confidence in his workmanship and commitment.

Oh my goodness! I was very impressed and I'm super picky. I had gone through a couple of bad hail storms and was very worried about my roof. I called Mario and he came out the next morning and climbed up to look at the roof. He did a complete inspection and took pictures of everything to show me so I didn't have to just go on what he told me. it turns out that my roof was fine and didn't need anyt...

My roof was looking odd to me so Mario came out that day and climbed up and checked everything out. He took pictures with his phone and showed me just what the problem was, and what needed to be done to fix it properly. No one had ever shown me pictures before. He showed up the next day with his crew and it was quickly repaired. They did a great job and cleaned up after themselves. All I had to do...

We have a number of companies that we can refer our clients to however we do not work on interiors of homes, sheet rock, raftors, pluming, aircondition.