Fencing
Fencing Driveway Gates
Wrought Iron
Welding
Deck Maintenance
Concrete Driveways
Decks and Porches
Licensing
Insured
All statements concerning insurance, licenses, and bonds are informational only, and are self-reported. Since insurance, licenses and bonds can expire and can be cancelled, homeowners should always check such information for themselves. To find more licensing information for your state, visit our Find Licensing Requirements page.
Business Details 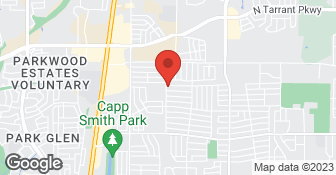 A & D Fence is a full service fence company, our team are both friendly & professional and pay attention to detail....

These are a few of the construction faces that we do: Driveways and all flat works and repairs. Forming and framing steps and circular driveways or patios. We can do any type of fencing, including wooden and retaining walls. We are licensed and insured. We have a long list of references, and quality and dependability is our motto.

Vicane construction LLC is a family owned business base on concrete construction.we provide high quality cement services for residentual area and are fully licensed and insure we proudly serve anywhere in Texas

Since 1990, we have been specializing in tree services of all kinds-- trimming, tree removal, stump removal, stump grinding, and more! Family owned and operated. Owner, Viliam, took over his father's company, to continue the family tradition of providing great quality work, while delivering great customer service! We guarantee your satisfaction and we won’t leave until the job is done right. Check out our services offered and call or click to schedule a free estimate today!

The wrought iron gate is supposed to be powder coated and finished.  He said it wouldn?t fade for at least 10 years and after 2 years it is chipping and fading.  It looks like the fence and gate are about 20 years old.    Andre wired the electronics incorrectly and the motherboard had blown out.  It took him a year to come out and rectify the situation, he said to me ?I just thought you guys didn?...

terrible job performed, the crew of two men came out for two days the sander did not know how to use the equipment and left scarring on the fence, the painter did not know how to use a sprayer, miss several promised start dates with no followup, the workers were not supervised, when they fished they did not give me te opportunity to inspect the fence, many missed spots, they eventually came back a...

A nightmare to say the least, the worse time ever  going though a contract.  The contract started on October 17th, 2011 and never got complete as of May 29, 2012.  The contractor (the owner) was only on site for about 25% of the time and normally had several of his worker out on the site and no one was in charge, the worker continues to argue on how they thought the job needed to get done, vise th...

DESCRIPTION OF WORK
Contract was to fence in 5 aces (only 3 sides needed), with 3 gates (one on the east and west side of the property).  A pipe and wire fence, with a iron sliding gate, remote control,  in masonary stone at the main entry to the home.  Also to build a well house, 10x10.

After reading many favorable reviews about this company on Angies List, I contacted Audrey at A & D Fence & Construction for an extimate.  He was quick to respond and provided an estimate on March 28th.  I decided to accept his bid, but had great difficulty in contacting him to schedule the work.  After 3 or 4 emails. he finally scheduled the work for Tuesday, May 8th.  As of noon on that day he h...

DESCRIPTION OF WORK
Was supposed to repair a side gate and extend it out approximatley 8 feet and install a cover around the a/c unit.

Excellent job.  Andre promptly returned phone call and came to our site and gave a written estimate.  Work started the following Monday.  Andre and a crew of 3-4 completed the job in about 3 days.  His estimate (which was final price) was $500 - $700 lower than his competitors, and he was able to start  the job sooner.