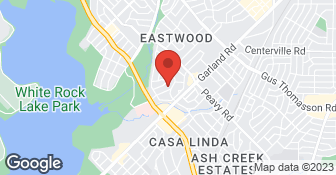 Over 30 years experience in bathroom remodeling. Member of BBB with an A+ rating and have been a member since 1999. Quality work from an honest business owner. Service fee is required to come out. Check out our fb page Don's Diamond Tile...

The shower is perfect.  He walked us through our options and had good recommendations.

DESCRIPTION OF WORK
Don built us a shower with seat and tiled the floor in the bathroom.

The whole job was multiple days and went very smoothly. Communication of what was completed each day and needed to be done next day was very good.

DESCRIPTION OF WORK
In 2004, Don Diamond demolished and remodeled a stall shower for us. It still functions perfectly and looks fantastic in 2014. More specifically, Don removed the old tile and the stained fiberglass/plastic shower floor. He installed a new shower pan and tiled the shower floor, the shower walls, and the area around the separate whirlpool bathtub. Don was pleasant and helpful throughout the remodeling process. He provided good suggestions and assisted in the tile and grout color selection. The two men who installed the tile were long term employees. Don also had a plumber change out the shower fixtures and a subcontractor install the shower glass. While residing in California, I called Don for advice, as the shower remodel in CA was not going nearly as well as the one Don had completed for us in Dallas. Don was as pleasant and helpful on the phone, while providing free advice, as he was in person. |I would highly recommend Don Diamond. He is an expert in his field. You can count on the remodel being performed exceptionally well.

This is a small, family owned and well established company. The owner is hands-on and provides careful oversight of the work in progress. He and his small crew were punctual, professional and skilled. They were careful to protect our wood floors, stairs and walls in spaces that are somewhat confined and narrow. The estimates of both cost and time were exactly as quoted. This is not the least expen...

General Information
Licensed
NA
Bonded
No
Insured
Yes
Free Estimates
No
Payment Options
Check
Senior Discount
No
Emergency Service
No
Warranties
No
All statements concerning insurance, licenses, and bonds are informational only, and are self-reported. Since insurance, licenses and bonds can expire and can be cancelled, homeowners should always check such information for themselves. To find more licensing information for your state, visit our Find Licensing Requirements page.

A
84 REVIEWS
Raindango Design and Remodeling