Screen repair
Sunrooms and Patio Enclosures
Window Treatments
Windows - Safety & Security Film
Decks and Porches
Licensing
No License Required for Trade
Insured
All statements concerning insurance, licenses, and bonds are informational only, and are self-reported. Since insurance, licenses and bonds can expire and can be cancelled, homeowners should always check such information for themselves. To find more licensing information for your state, visit our Find Licensing Requirements page.
Business Details 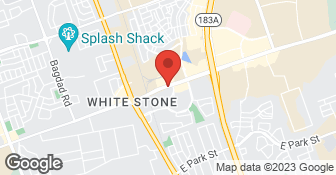 Action Screens is a family owned business. I treat every customer as the most important, because it is my reputation and integrity on the line with every job. I hire quality people and train them in my way of installation. The job is not complete until the customer is satisfied....

The Glass Guru of Austin

Do you have Foggy Dual-Pane Windows with condensation or residue between the panes? Our proven Moisture Removal and Window Restoration Process can fix this problem at a fraction the cost. When restoration isn't the best option, our full-service location offers the highest quality, name brand replacement products at great prices. Above all else, we pride ourselves in offering the best possible service to our customers. Whether residential or commercial, we can take care of most of your glass and window repair, restoration and replacement needs. Super Service Award Winner-7 years in a Row! Showroom/Office hours are by appointment only.

5 star rated everywhere you can find us. BBB A+ rated.

As a family-owned business, we take great pride in helping you maintain and improve your home. We understand how important it is to believe in the integrity and dependability of the hands you trust to upkeep and add value to the place you live. With an emphasis on communication, integrity-driven business, and exceptional work, we look forward to earning you business and your trust. If you're looking for quality, detail-oriented and specialized handyman services, give us a call!

Terry took on a job I had been trying to find someone to do ever since I bought my house, fabricating frames and installing screens in three windows that for some reason were missing frames, screens, et, al... Every other company bailed rather than even return my calls. This was no big thing for Terry. He replied promptly, was back sooner than estimated with perfectly fitting and color matched fra...

When I bought my house 7 years ago, it had good Pella replacement windows, but for who knows what reason 3 windows in the main living area had no screens. No frame, nothing. I have been tryi ng of and on over the ensuing years to find someone to take care of this. This effort has resulted in nothing more than a bunch of unreturned phone calls. Even Pella wanted no part. After a few calls to them w...

Terry came and gave me an estimate. He provided information for me to give to the HOA. I asked him to bring samples of the materials, and he did. He also matched the screen frame to the color of the brink and trim. Terry gave me an estimate, and he told me it would take 3 days once the materials arrived. It did take 3 days, but it was some half days because we were getting wind and rain from Hurri...

DESCRIPTION OF WORK
I needed a patio screened in. The house provided two sides, and I wanted the other two sides screened with a screen door. I wanted a study kick plate at the bottom of the screen, and I wanted to use 20x20 screening.

Terry arrived when scheduled, introduced himself and presented his business card. He took a look at the doors to be fixed and went to work immediately. Work was done in 2 hours. Friendly and professional, an Old World gentleman. I asked for several of his business cards to give to friends.

Terry was great! He arrived on time and replaced the screen in my door very quickly. I would certainly use him again.

DESCRIPTION OF WORK
The provider repaired my screen door.