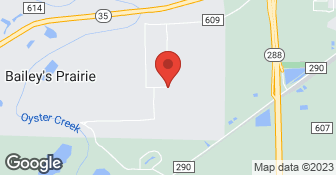 Family Owned Company that my wife and son help with. We do the job turn key, pull all permits have materials delivered and send a qualified crew out to do the work. Our crews are supervised and the work is inspected and the job site is always clean. We also take care of the wind storm certificate in the wind storm zones....

I would never hire him again. They were on time when the roof was to be started and finished in a day. We requested when we signed contract to have all pipes on roof replaced and also the chimney flashing. Sewage vent pipes were covered with lead as requested. The central heat gas flue and hot water heater gas flue were not replaced as requested. Only caps were replaced three weeks after roof comp...

He was terrible! The job took 14 months instead of a few weeks. He is awful about being in communication and was only good about returning calls when he wanted more money. He went up on the price three times and we still haven't gotten our windstorm certificate. I will NEVER use BCS again and would never recommend him.

Crew arrived early on the 5th. Stripped the old roof off down to the plywood by 10 a.m. Had replaced almost all the bad plywwod before the wind inspector showed up. She arrived earlier then expected forcing a delay on completion until the 6th. No fault of Bull Dog! Completed after inspection the following day. The Wind Storm Inspector told me they had done a very good job. The clean up was as good...

There was a mix-up in the scheduling and they did not arrive at 7 am the first day.  When the mistake was discovered, they hustled a crew over here at about 10 am.  They worked until dark and got half of the roof done.  The next day they arrived PROMPTLY at 7 am and worked until mid-afternoon until they were finished.  We have had two severe storms since the roof was put on and we were totally wat...

DESCRIPTION OF WORK
Took off the old roof and put on a new one.

They were prompt and fixed the problem.

DESCRIPTION OF WORK
We had a leak in our roof.  Chip came out and caulked the area.  We have had no further leaks.

General Information
Licensed
Yes
Bonded
No
Insured
Yes
Free Estimates
Yes
Eco-Friendly Accreditations
No
Payment Options
Check, Visa, MasterCard
Emergency Service
Yes
Warranties
Yes
All statements concerning insurance, licenses, and bonds are informational only, and are self-reported. Since insurance, licenses and bonds can expire and can be cancelled, homeowners should always check such information for themselves. To find more licensing information for your state, visit our Find Licensing Requirements page.