A-1 Plumbing of Baltimore 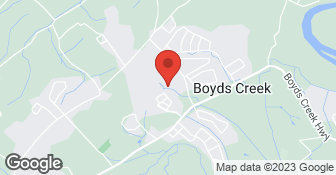 For 20 years, Chaffee Air has been counted on for fast, courteous and reliable heating and cooling services in the greater Knoxville, TN area. Rex Chaffee, the President of Chaffee Air, understands that today's home owner has a multitude of HVAC contractors to choose from. That is why, for years, Rex has been committed to focusing our business on customer satisfaction. This means ensuring that our customers receive the highest quality of workmanship and product at the absolute best price. We repair, service and install all makes and models of heating and air conditioning systems for both residential and commercial customers. Additionally, we provide plumbing services, UV air sterilizers and HEPA air filters and humidifiers. Let us custom design a heating and air conditioning system for your home. There are so many options available today that it can be confusing. We can help you decide exactly what system will fit your needs, expectations and budget. Owner operated. Financing with approved credit available. Award winning.

We provide Home Services Heating and Air Conditioning, Plumbing Repairs, Minor Electrical Repairs, Painting, Decks and Porches, Drywall Repairs and Lawn Services With 30+ years in the HVAC and construction business we can assist you with your project.

I was given a two-hour window for tech arrival and, unfortunately, the technician still ended up a little late. Once he was at my house, everything was good to go! The person they sent knew what he was doing. He was very willing to answer all of my questions about the type of toilet he was installing as well as the process. He even explained how to use the shut off on the supply line in case the t...

Just came here and charged 75 bucks and did absolutely nothing.  He didn't even see where the leak was coming from.  He then said it could be this or it could be that but never investigated the issue...but let me know that it could cost approximately 600 bucks to fix.  I would not recommend this company to anyone.

DESCRIPTION OF WORK
Nothing!!  No investigating the leak or anything.  Just pure speculation!

The entire experience with A1 plumbing of Baltimore was a disaster.  Worst.company.ever.

DESCRIPTION OF WORK
A-1 Plumbing of Baltimore is hands-down the WORST contractor I have ever dealt with in my life.  I would NEVER recommend their services to anyone.  I called them out to my house for a clogged pipe on 8/1/11 and they were able to come over within a few hours.  They sent a first year apprentice (or so they claimed) and a "helper" to my home to solve the problem.  I told them were the issue was located, as I've had this issue in my house before.  They refused to check out the problem area and began trying to figure it out themselves.  Long story short; they got about 45 feet of snake stuck in the pipes/trap and could not get it out for over an hour.  I called the office to complain and asked for a supervisor to come out.  They supervisor then called the techs and told them I was complaining and not happy with their service.  They began screaming at me and threatening me in my own home, repeating over and over "i've got  3 kids, you trying to get me fired?!?!?!?!".  The supervisor got back on the phone with me and said they couldnt fix the problem and I would still have to pay for their time/attempt at fixing the issue.  After refusing to pay, the superisor then told the tech (over speakerphone) to get the equipment out of my house by any means neccessary, even if it meant taking off the manhole cover outside on the street and ripping the snake out with their truck.  The techs then attempted to do this and cursed me out again.  After contemplating calling the police on them, I ended up just removing their tools from my house and leaving the snake in the drain (which cost me 200 dollars to have removed by another plumber), and telling them to leave my property. On top of the threats, terrible service, lack of knowledge, and zero professionalism.....they were also clueless and did not use a drop cloth when sitting their snake and eqiupment on my white carpets (which are now completely ruined). The owner, Byron Graham, has refused to pay for his techs mistakes and destruction of my property.  Do yourself a favor and call another plumber, using A1 will only lead to major headaches. It should be noted that they have multiple offices around the baltimore area, so stay away from any A1 plumbing companies.