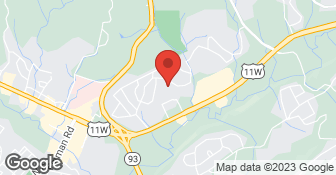 Mr. Fix-It Home Improvements is a locally owned small-business operating since 1993. We have a small number of employees and pride ourselves on the relationships we have established with our customers. Our goal is to leave your home in pristine condition or, even better than when we arrived. Additional DBA - Mr. Fix-It Home....

Carter Clean, LLC, is a locally owned and operated company based in the heart of Johnson City, TN. We specialize in pressure washing, professional window cleaning, concrete cleaning, roof and gutter cleaning. With a staff of over 30 years experience, our team of trained professionals are equipped to handle any type of exterior cleaning requested. Licensed and insured, we guarantee our work. We build long term relationships with our clients, and look forward to building a relationship with you! Call or text us today at 423-202-2950 for your free consultation!

Established in 1982, Lloyd's Electric Service has grown into one of the top electrical contractor companies in the region. Our company offers residential, commercial and industrial electric services, alternative energy solutions, preventative maintenance, and fiber optics installations. Our commitment to our customers and community is apparent through our efficient and high quality work. During our storied history,we have become experienced in a broad range of markets.

Darrell and his crew removed our old deck and in it's place, installed a screen porch and new deck surrounding it. Darrell provided some design ideas on the screen porch, and was very helpful. The cedar trim around all the screen openings looks awesome! The workmen showed up on time, did an excellent job, and did it all for a reasonable price. Now that it's done, we love our new screen porch and d...

They built a new deck for us and did a great job on the deck. However, one of the deck railings was not cut or installed correctly, and four months later, he still refuses to return and fix it. It would only take 1-2 hours of work to correct this, but he will not take care of it.

Extra work was performed with extra expense & not discussed with me. We eventually settled but the roof leaked in 2 separate places. They said they would fix and it was "under warranty ". At least four requests were made to "fix it". They never showed up. I had to pay $2,600 to repair their insufficient workmanship. I would never allow anyone I know to use them.

Their online response was immediate and the job was completed as promised. We felt very fortunate to have found an expert. The sink is now in place, and secured in the way it should have been when it was originally installed. The proper adhesives were used and a wire brace was added for extra support.

DESCRIPTION OF WORK
We needed our under-mount kitchen sink put back in place. The sink unexpectedly dropped lose from the granite countertop also damaging the PVC piping.

called twice in 3 days and NO RETURN CALL. I was excited to find someone with the "alleged" qualifications for all the work I need to have done as I rather deal with one person. Very dissapointed and NO chance I would do business with this guy. I called Monday -weds trying to set an appointment. He must have all the work he needs. No Call back.

DESCRIPTION OF WORK
Electrical, Roof for screened porch, re-model a bathroom, and finish a basement, deck repair and seal.