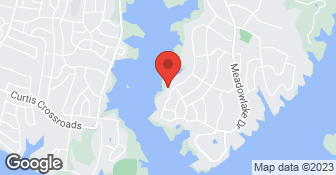 We are a family owned and operated business based out of Nashville. We specialize in seamless rain gutters, gutter protection, fascia and soffit repair/replacement, hardwood, laminate and luxury vinyl flooring. We are equipped to handle occupied residences, new construction and commercial installations. If you are looking for a personal touch to turn your house into a home or give your business an updated look, contact us today!

We take great pride in our experience, expertise, quality, and customer service that we provide to meet the consumer's needs. It is our mission to provide excellent workmanship and complete customer satisfaction from start to completion of a project. In order to understand the needs and expectations of our customers, we take great care to work and communicate with every customer in a professional manner. Our reputation is based on service, safety, and quality, regardless of how large or small the job.

After they completed the job there was a visible hold in the roof.  Rain came through the hole and damaged the house.  After multiple calls, they never completed the repairs.  We had to have another roofer finish the job.  They also tried to charge us for removing a layer of shingles that was not on the roof.  After we pointed this out and questioned them on it , they did not charge us for that.

These folks need to be in another line of work.  The quality of the workmanship was terrible and only after repeated requests did they make an attempt to make it right.  Still very unhappy with the management and the crew they sent to do the work.  They left a mess and it took several weeks to get it straight.  The roofing crew was Hispanic non-English speaking "gang" that did what they wanted reg...

DESCRIPTION OF WORK
Replace roofing on home and one out building.

Work scheduled but never showed. Said it was because of the weather but it was clear and 77 degrees all day. Worker never showed. And they were actually trying to get a $5000 job in addition to this minor repair. If they will not show for this how can you expect them to show for critical repairs? The salesman will give you the great pitch and even tell you that they are a "Christian" company. That...

We called Genesis out for a quote after finding some wind damage. Their estimate was lower than some --about the same as others. They were noted as a "preferred vendor" for our insurance company and had done a couple other roofs in the neighborhood. They came exactly when they said they would and finished the job in the period of time expected. No complaints!

Someone came to collect the money before they had even finished the job(we refused to pay at that point.)After the shingles were down,we paid & then realized they didn't put in the ridge vents we had agreed upon & paid for. At our insistence,they sent someone out to install the vents but upon later examination,we discovered the workers simply stuck the vent piece on the roof without cutting a hole...

DESCRIPTION OF WORK
Complete roof replacement. First,this company did not come when they said they would.Then they told us they would let us know when they would come,but they didn't-they just showed up.(Good thing I didn't have guests coming those days!)The non-English speaking workers were unsupervised.They left a huge mess.A year later I am still pulling large pieces of roofing out of the bushes all around our home.(When my husband complained about the mess, he got an indifferent shrug & a "Well, those things happen" answer.)