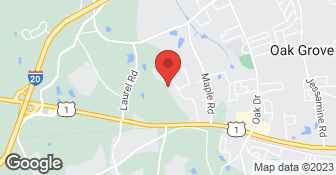 HI, my name is Scott and I have been in business for six years, but I have over 15 years experience in Drywall and Painting. I also do home improvements and remodels. i am a licensed and insured. My work speaks volumes. I also give discounts to senior citizens as well as military and first time clients.

As a young owner of this company , I am here to give the best services that I can and will always go above and beyond to help a customer. Weave Electrics invites you to experience prompt service and superior attention to detail. Our customer satisfaction is our top priority. We will earn your trust for a lifetime. We believe in making all clients repeat clients. You can be assured you're in good with our company. If you are looking for a professional that follows business practices such as promptly returning phone calls, arriving on time for appointments and following through on promises then get with our reputable company today. Thank you! TEACHER AND MILITARY DISCOUNT !

DESCRIPTION OF WORK
We had a terrible job. We had a terrace on the upstairs of our house and it had started leaking into the house, and I had no clue what to do. He replaced the tile and the baseboard in the house.

DESCRIPTION OF WORK
They fixed a GFI outlet that had been installed incorrectly in my kitchen by the original home builder. Very prompt and professional.

Jeff does meticulous work and is probably the most honest contractor with whom I've dealt. He responded quickly to some issues with the addition even though there was no fault on his part, and we really appreciated that.

DESCRIPTION OF WORK
He renovated a porch addition on the back of our house.

Jeff was on time and did exactly what he said he would for the estimate he prepared. Clean and timely in addition to good work.

DESCRIPTION OF WORK
Exterior wood work needed painting he put aluminum cladding over wood to prevent further painting, relocated a home ice machine, along with other misc jobs. We later had Jeff create a closet under an eve on the top floor.

We truly wish we had hired him from the start. He came in took over after much stress and wasted time. This is someone you can totally depend on!

DESCRIPTION OF WORK
We have hired Jeff for many projects. He built our dock and gazebo and most recently he came and finished our house that was being constructed. He hired competent subs and saw that all work was completed in a timely fashion.

THANKS FOR THE GREAT REPORT. I WISH I WOULD HAVE BEEN AVAILIABLE AND PREPARED BEFORE THE OTHER CONTRACTOR WAS CHOSEN. I JUST HOPE ALL IS WELL NOW.