Interior Design and Decorating
Home inspection
Hardwood Flooring Sales and Installation
Handyman Services
Florists
Flooring Sales and Installation
Drywall
Decks and Porches
Countertops and Backsplashes
Unfinished Carpentry
Licensing
Bonded
Insured
All statements concerning insurance, licenses, and bonds are informational only, and are self-reported. Since insurance, licenses and bonds can expire and can be cancelled, homeowners should always check such information for themselves. To find more licensing information for your state, visit our Find Licensing Requirements page.
Business Details 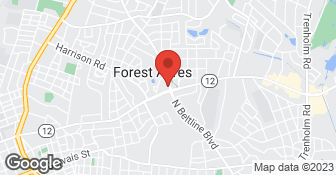 Exterior Painting Company and authorized dealer of Rhino Shield in South Carolina. Rhino Shield is is an exterior ceramic coating product that is applied to the painted areas of your home. It looks like rich, fresh paint and has a 25 year Warranty against cracking, chipping and peeling.

Carolina Property Inspections, LLC conducts residential (up tp 4 units) and commercial property inspections. We inspect every property as if we were buying it for our family to occupy. CPI, LLC is owned and operated by James Jennings, a retired firefighter. James has inspected hundreds of building while serving the citizens of the midlands of S.C. as a firefighter. Trained and certified through InterNACHI and licensed through the State of S.C., James is continuing that service through home inspections. We offer 1st Responder and military discounts.

We took him to court.  My mom went to consult with an attorney, and the judge found him guilty and awarded us our money back.

DESCRIPTION OF WORK
I paid for some work to be done at my parents house.  Someone that my father knew referred this company, and they wrote up a contract.  He was to remodel the kitchen.  He only came once or twice a week, and would bring his wife or children.  He always came with a sob story, and my mom is a christian, and she will always help people when she can.  He always claimed his kids were hungry, so she would feed them, and then started asking for extra money so he wouldn't get evicted.  She gave him some extra money (which as supposed to be going towards repair getting done) but he just took it.  He was a "pastor" so my mom trusted him.  He took her to lowe's and home depot, to show her what he needed.  She gave him money for materials, and he never bought anything.  When confronted, he went and bought some countertops, but left them outside somewhere so they warped.  He blew a fuse on the oven, broke the ceiling fan, and then wouldn't come back and finish the job.  We all tried to talk to him, but he never would come back.