Pain Management
Neuroscience - Neurosurgery
Orthopedics
Rehabilitation - Physical Medicine & Rehab
Neuroscience - Neurology
Licensing
All statements concerning insurance, licenses, and bonds are informational only, and are self-reported. Since insurance, licenses and bonds can expire and can be cancelled, homeowners should always check such information for themselves. To find more licensing information for your state, visit our Find Licensing Requirements page.
Business Details 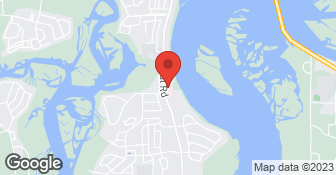 Our team of accomplished neurosurgeons are experts in diagnosing and treating patients with abnormalities of the nervous system, including the spine, skull, brain and peripheral nerves. Store number - 4240A....

Determined some nerve damage in arm/ shoulder and carpal tunnel in wrist/ hand. Dr. Keffer suggested that I see an orthopedic surgeon specializing in hand surgery.

DESCRIPTION OF WORK
Follow-up nerve test on arm to see if there was any nerve damage since last year's test.

I highly recommend Dr. Carroll.  He is bright.  Treats patients as people.  Was helpful to me.

DESCRIPTION OF WORK
Evaluate and treat a knee injury.

Waste of time, emotion, and money.  (see above)

DESCRIPTION OF WORK
Don't go here- they do not take care of their patients.  I went in for a recurrent whiplash injury to see Dr. Keffer at the pain management center.  My goal was to hopefully get trigger point therapy to fix the problem before my next backpacking trip to the Amazon for important research.  The only reason I paid for health insurance for over a year was to have the pre-existing condition covered and to be taken care of, finally.  After my last trip to the Amazon, in May, I have had excruciating pain in my neck and shoulders and lower back, so much so, that is has been dangerous to drive- crying and holding my neck.  Dr. Keffer saw me one time and then decided I only had fibromyalgia pain and no back pain, although he never really felt for the pain (you can feel the creaking and knots in my shoulders and neck).  He just judged me, based on a negative MRI screening (they left my belt on in the MRI), and actually went so far as to call me an addict.  I would take Ibuprofen, which helps in large quantities, but I took so much for the pain that I now have stomach ulcers.  The amount of Tylenol I would need to take would be toxic to my liver.  The medicine they did prescribe came with Tylenol, so I was still taking a lot of that each day, although I expressed concern about what I was putting into my body.  I am a grad student, volunteering at the hospital, writing a 150 pg thesis and taking major exams this fall.  He has not helped me, but hurt me, calling me something that I most certainly am not and not taking care of me like his oath stated.  He has too many patients, he said, who come in with back and neck pain, whom he believes are lying about it, so he has placed me into that category.  This was completely unethical- he gave no referrals and wouldn't even let me keep my next appointment, saying we had it over the phone.  I only wanted to explain to him what the issue is better so we can figure this out, as we should.  I now owe St. Francis over $1,000, after insurance, and have not been helped, but degraded in the process and added unneeded stress.  Dr. Keffer does not truly care about his patients.  He insults them.

He was good. He did the operation and she was able to walk out without pain. He was a big winner. We have seen the results of his work and it is excellent. I would recommend him any day of the week.

DESCRIPTION OF WORK
Dr. John D Steichen is our orthopedic surgeon. He did a lower back surgery on my wife.

No story.....no resolution for my back pain.