Decks and Porches
Dock Building & Repair
Finished Carpentry and Woodworking
Garage and Shed Building
Chimney Repair
Chimney Caps
Chimney Sweep
Ceramic Tile
Cabinet Making
Licensing
Insured
All statements concerning insurance, licenses, and bonds are informational only, and are self-reported. Since insurance, licenses and bonds can expire and can be cancelled, homeowners should always check such information for themselves. To find more licensing information for your state, visit our Find Licensing Requirements page.
Business Details 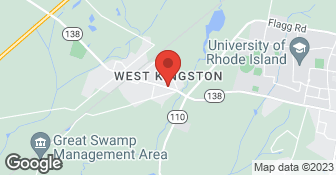 home remodeling and we specialize in roofing, siding, and plastering for the past 20 years...

The Red Carpet Company stands for service beyond comparison. We are a multiple award winning fabric and hard surface cleaners. We do not install carpet, tile or inlaid products. Our professional, uniformed technicians combine trade knowledge and experience with a friendly attitude and attention to detail. Our first time customers enjoy a 30% introductory discount, as our way of introducing you to the "Red Carpet Treatment". Our goal is to make you a Red Carpet customer for life. Our offices are located in Warwick RI. We accept all major credit cards or pay by check once our work is complete and you are completely satisfied.

RM MASONRY, INC. (401) 648-5008. OWNER OPERATED. NO SUBS. COST IS DETERMINED BY THE JOB, APPOINTMENTS AND QUOTES ARE FREE. NO TRAVEL CHARGES. NO SERVICE FEES.

We are a locally owned and operated home improvement and exterior cleaning company based out of Providence, RI and servicing all of Rhode Island, Massachusetts, Connecticut and throughout New England. Our services include: Gutter and Downspout Cleaning, Gutter Repair, Replacement & Installation, Pressure Washing (Roof & House Exterior), Deck Restoration (with Sealant and/or Staining), Deck Maintenance, Window and Screen Cleaning, Carpentry, Exterior Painting, Leaf Removal, Ice & Snow Removal and much more! We are fully licensed & insured and strive to exceed the guidelines established by the Roofing Manufacturers Association. Our mission is to provide the highest quality service to our customers and make it our top priority. We always strive to complete the job to our customers’ requirements and guarantee that it will be done right and on time! Please contact us today to schedule an appointment! 20% OFF from second Home Power wash to Angie's List members. Regularly priced for 2000 feet at $299.00 10% off for Deck maintenance to Angie's List members. Priced regularly 200 feet for $289.00 Call to claim at 401-327-8409

It went Awesome. Jason is a master Plasterer and his team is amazing. They are clean and have consistently beat every quote the first time. Jason has a great crew, one of his team members did not show up due to illness and Jason called us the night before to let us know he was going to bring in an extra resource to finish on time. He has always meet our deadlines and his communication is great. Th...

First paragraph in a 2016 D review could have been written by me. Crew didn't show up regularly and, although the plaster came out okay, it was, overall, a painful experience. Contract began on June 7th and on June 18th (2 days before scheduled completion date) I had a local homebuilder inspect the job. His opinion was that, at best, we were 50% complete. One and a half days later JH declared the ...

First, we finished AHEAD of the contract schedule. Second we Completed the contract. Worked very late hours till 2am and someone was there every day. Lunch breaks don't count as not regularly. As for the 3 1/2 day handyman hired, we weren't contracted for any handyman services although we did do over and beyond what we had to do including detailing entire condo handing it over move in ready. Since...
D

Jason started off strong and I was hopeful that all would go well because he talks a good talk about experience, punctuality, and doing a good, detail oriented job. I came to learn his work is mediocre to bad (other than plaster) and he is not trustworthy. Jason is good at plastering and painting. Anything beyond that is a battle and not good. Framing, hanging doors, trim, stairs etc - not good. T...

DESCRIPTION OF WORK
Remodel of a room and new bathroom. Basic framing, painting, trim, bathroom. Also a staircase on a front porch that needed to be re-done because it was old and getting rotted. I own a multi-family apartment so safety is a priority.

These people were micro-managers. Everything was done that was asked. I was forced to use old hardware that didn't fit and old crooked doors that were stored in basement. De-nail old trim to put back up. I was the worker and the father was the boss telling me what and how he wanted it done his way. Swept up and cleaned 4 flights of stairs every day and never asked to. Stop payment was on a materia...
B

I had called Jason and another company from Angie's List. Both came at their time designated. Their pricing was almost the same, so I decided to use them. A date and time was set and -no Jason. After over an hour I called. He had gotten stuck on another job and had lost my phone number. So 2 of them did show up fairly quickly and proceeded to start the work. Because our apartment is fairly small a...

Everything went well. When he showed up to do the work I wanted him to do other things that were part of the original estimate and he had no problem doing the extra work. He came back a few days later to check on the job and to make sure there was nothing missed.

DESCRIPTION OF WORK
I had Jason do the drywall on my basement remodel, he was done in a day and a half and did a great job. I had him come back twice since to do other work.