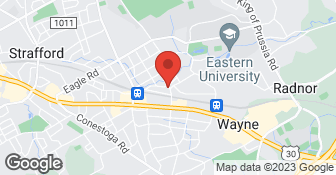 8 EMPLOYEES. NO SUBS. COST IS DETERMINED BY THE JOB. NO TRAVEL CHARGES. NO SERVICE FEE....

We are Carmelo's landscaping LLC. We provide a professional and safe service. Businesses started back in 2012 by Carmelo himself and still working with the crew to help bring the best. We service the Tri state area, mainly Chester County & Delco

A woman owned small business providing rehabilitation of overgrown plantings Remove plants in anticipation of an addition to the house and restore the plants after the work is completed, integrating the plantings into the rest of the landscape design Use native plants when appropriate or as the client requests Use deer resistant plants in areas with deer Create curb appeal for houses going on the market Review plantings and landscape with new homeowners who have no idea what is on their property or what kind of care the plants require Offer a consultative service to homeowners that teaches them aspects of landscaping that they want to learn how to do themselves. This service is billed at an hourly rate.

Brison Landscaping is a full-service Landscaping Company servicing both commercial and residential clients in Delaware and surrounding areas. Locally owned and operated since 2003, Brison Landscaping takes pride in providing the Tri-State area residents with high-quality, dependable landscaping services that enhance the look of your property. Please call to schedule.

Landscaper dug a shallow hole, dropped the trees in, did not loosen burlap around root ball, and I saw no evidence of peat moss or hummus. Much of the top half of the root ball was left exposed and just covered over with mulch. Trees began dying within 4 weeks desite my watering them. Landscaper has refused to return my telephone calls. Last year another Landscaper planted the same trees in anothe...

The member contracted my company to plant 7 Arborvitae and remove one tree in her backyard. I completed the work on 8/22/09 and she was satisfied with the work performed and I was paid in full. Some time after that, her grass cutter told her that the Arborvitaes were planted incorrectly and this caused her to become concerned with the welfare of the plants over the winter. I photographed and inspe...
F

It didn't - the work was never completed.

DESCRIPTION OF WORK
We hired Dominick to do leaf removal and fall clean-up in 2006 and had no problems. This year we re-scheduled the same service for the week after Thanksgiving and before our township's final leaf collection. His crew did not show and he was unreachable. When we finally got in touch with him, he told us that he was too busy with other jobs to get to ours (even though we had scheduled him in early October).

THE SET TIME WAS 9:00 AM AND CHUCK, THE TRUCK DRIVER, ARRIVED AT 8:57 AM. THE DUMP WAS 5 MINUTES LONG BUT CHUCK WAS SO FRIENDLY THAT WE SAT AND HAD SOME BRUNCH.

DESCRIPTION OF WORK
DUMPED A PILE OF MULCH AT OUR RESIDENCE.