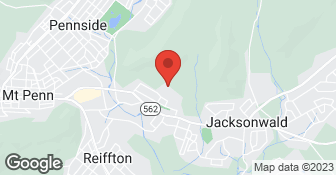 DESCRIPTION OF WORK
We hired him to restore (blast, prime & paint) the 1860 fence around Unionville Cemetery. His quote was $7,200. Signed a contract for $7,300 on 12-11-2013.  Received a call May 2014 stating he was going to do the job the week of May 5. He never showed. Started blasting on 5-13. Worked for a couple of part time days. We called inquiring about when he was going to come back and complete the fence. He requested an addition $3,000 for paint and primer. We agreed to the increase to try to save the job (now $10,000). By 6-21-14 he had not completed the blasting. It was excuses after excuses i.e. Government Job and other jobs that needed his attention. On 9-2 he started priming and painting. He painted the 6 large granite post with primer.We have photos. After numerous discussions, he agreed to blast the primer off the posts. Large and small sections of the fence were never primed or blasted. After we complained, he started to paint on 9-16 to cover all of his errors.  On 9-17 he called and wanted paid as the job was complete. Our inspection of the fence showed rust hanging (now some covered with finish paint), numerous areas of the fence showed primer without finish coat, numerous areas of the fence were not touched by blasting, wire brushing, primer or paint. On 9-18 the Cemetery Board decided to terminate the contract as the fence looked worse than before he started. On 9-19 I informed Soda Blast Pro, Richard Jaskiewicz, of the Board's decision. On 9-22, I met with another contractor, professional fence restorer, he agreed the job was not completed and not finished in a professional manner.

I took on this job for a minimum profit to help out this association. There were a couple of individuals on their board that proved to be impossible to work with. They complained about everything. This fence was in such ill repair that proper blasting methods would have totally destroyed it. When we finished the fence which was located on a main road we had numerous individuals stop and say how wo...

General Information
Bonded
No
Insured
No
Free Estimates
Yes
Payment Options
Check
Senior Discount
Yes 15%
Emergency Service
No
Warranties
No
All statements concerning insurance, licenses, and bonds are informational only, and are self-reported. Since insurance, licenses and bonds can expire and can be cancelled, homeowners should always check such information for themselves. To find more licensing information for your state, visit our Find Licensing Requirements page.

A
1 REVIEWS
From The Ground Up Paint & Repairs