Leaf Removal
Handyman Services
Gutters
Gutter Cleaning
Firewood
Decks and Porches
Licensing
Insured
All statements concerning insurance, licenses, and bonds are informational only, and are self-reported. Since insurance, licenses and bonds can expire and can be cancelled, homeowners should always check such information for themselves. To find more licensing information for your state, visit our Find Licensing Requirements page.
Business Details 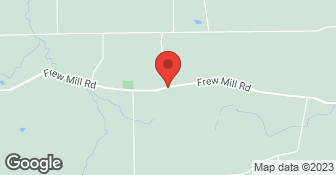 Free on-site quotes. Signing of contract requires one-third down payment. Balance due upon completion of job....

Falls Tree Experts is a fully equipped professional Tree Service located in Aurora Ohio. We maintain about 15 employees. We can assess your trees and develop a plan for tree preservation, repair or removal as needed. We are registered in all cities when required for permitted work as. We are a Certified Arborist Company and a member of the ISA and the Ohio Chapter of ISA For your convenience, We can leave you a no hassle itemized estimate at your home without the need for you to be there, most of the time. You can choose what you would like to have completed. We can also meet for an in person estimate as well if desired. We strive for our complete clean up after the work is through. We will provide free estimates and look for any other items that we would recommend as well for your consideration. We have our own equipment and crews to provide prompt professional service. Additional DBAs: Falls Group, Mr Falls Tree Service

Over 35 years of experience in residential and commercial tree services. Total Tree Care is fully insured. We offer free estimates, reasonable rates, with the convenience of credit cards. Give us a call today!

50I called him on 8-17-15,  based on a coupon I received from this site. He came out a few hours later to provide an estimate. He planned to start on the tree the following day but was delayed by rain. He did however, move his boom truck to my home on the evening of the 18th so that it would be on site for the 19th. He and another worker came out early on the 19th and cut the dree down. I did not ...

DESCRIPTION OF WORK
He cut down a 70 foot high dead tree that was about 20 feet from my home. I wanted it cut down before I had a new roof installed.

DESCRIPTION OF WORK
Never returned my request for service.

I am sorry for any inconvenience that I caused by not contacting [Member Name Removed] in a timely manner. I was out of town toward the end of June and was unavailable for several days. I do not have contact information for [Member Name Removed] that I can locate and this is not my normal business practice. I try to return calls within a day and pride myself on keeping my appointments. Since I do ...
A

Thank you so much! It was a pleasure doing business with you. Have a great New Year!

I do not do stump grinding, but I can offer referrals if customer wants stump removed.