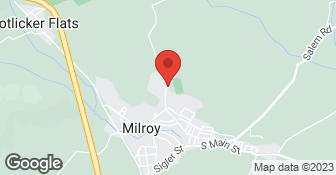 Very well. As stress-free as possible after having an accident and having to spend money to get your car repaired. Craig is efficient. He cares about his work and it's fantastic.

DESCRIPTION OF WORK
In 2009, I hit a deer and crumpled the hood and broke the windshield of my Honda CRV. I didn't know anyone in the area, so my husband directed me to Craig Houser of Houser's Body Shop. Being a female, I'm wary of auto anything businesses. Craig was wonderful to work with. He gave me a fair estimate and the work he did was marvelous. Last year, I backed into a telephone in my new Nissan Rogue and dented the bumper. Of course, without even thinking about it, I took my car to Craig. Again, he gave me a fair estimate, and pulled the dent out instead of replacing it, saving me $$. You can't even tell it was ever damaged. I might also mention that the turn around times for both mishaps was FAST. I was without a car for a very short period of time. I can't recommend him enough.