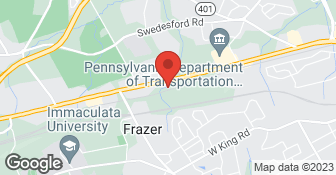 At Valley Veterinary Hospital we know your pet is a member of your family. Our responsibility and privilege is helping you take care of him or her! The hospital was established in 1996 by Dr. Lindsay Shreiber, VMD., with the goal of making a positive difference in the lives of patients and clients. Veterinary medicine with Care, Commitment and Compassion. We are your local full service Veterinary Hospital focused on taking care of of the medical needs of your pet. We have the facilities and equipment to perform medicine, surgery, dentistry, radiology, dermatology, as well as preventive care for your pet. Call us today to schedule your appointment - (610) 935-8110

Ignored our phone call for hours for help for our dog.

DESCRIPTION OF WORK
Not much good.

Our dog needed her first TPLO 2011, unfortunately recently she required surgery on her other leg. VETERINARY REFERRAL CENTER was wonderful for both surgeries. From start to follow up they provided excellent care

DESCRIPTION OF WORK
Dog required TPLO surgery, this was her second surgery at VETERINARY REFERRAL CENTER. I would highly recommend for their professionalism, care and individual attention of pet and owner.

My dog was admitted to another vet hospital and he needed to see a radiologist for a liver/abdominal/pancreatic/gallbladder ultrasound. I called on Tuesday and he was given an appt the next day with Dr. Shelling. When I arrived, the front desk informed me that there was an emergency so they were running about 30-40 minutes behind schedule. I didn't have a problem, as it is a hospital and cases nee...

DESCRIPTION OF WORK
Diagnostic ultrasound for my dog

I was pleased with my experience with Dr. Bagshaw. Although the appt did not start on time, he did spend a great deal of time with me and my family. He examined the xray I brought from my vet and explained that there were several areas that were unclear that needed a repeat of the xray. I explained to the doc that I wanted to be cost cautious and needed to know the cost of any procedures and recom...

DESCRIPTION OF WORK
My dog was having some trouble with coughing and had a high fever. My regular vet referred me here to get additional tests done after an initial xray indicated an issue. I made an appt with the radiologist Hadley Bagshaw for a repeat chest xray and possible ultrasound. I was able to get an appt within 24 hours. Appt was for 4pm and I spoke to a technician right away. We saw the doctor around 4:20 for the first time. He performed a chest xray with 3 different views ($225) and an isolated smaller scale ultrasound for $130.

SEE ABOVE A consistent story and updated forms would save a lot of customer irritation and anger directed at VRC office staff!

DESCRIPTION OF WORK
Decent animal care; Lousy Customer care! I was recently referred to VCR for an ultra sound exam to determine of the cause of frequent vomiting of my three year old Golden retriever. The local vet could not make an adequate diagnosis based on X-rays alone ($500). The Ultrasound exam indicated that our dog had swallowed something with a long string or cord attached and that it's surgical removal was required. Upon hearing the diagnoses we made the decision to proceed with the surgery and paid for the ultra sound tests in full ($360). We were then subsequently led to an exam room where one of the vets fully reviewed the details and risks of the routine surgery, ($2500-$3500) as well as the potential risks if there were complications. She stated the VRC payment policy required a 50% deposit of all estimated costs and that a "Pet Care Credit Plan" was available to pay off any remaining balance. She also explained that VCR operated as separate business entities within the same building and that as inconvenient as it was, we would need to complete almost identical sets of forms and releases for each business. The Emergency Care estimate was $800 and we were asked for, and made, a payment of of 50% or $400. We we were also given the "Pet Care" Credit application, to be completed at home. When the surgical staff member presented us with the surgical cost estimate and release form we were shocked. Not by the estimate, but by her request for payment in full. This was even though the very surgery release document, that we were being asked to sign, clearly stated in the "Payment Policy" paragraph: "A payment in the amount of 50% of the high end of the estimate is required at the time of admission". When we objected to the surgical office staff, who presented us with this release she said that the "Payment in Full" was a recent change in policy and they had not yet had time to update the release document. With our further objection to this contradiction, the clerk did contact the surgeon, who she said was in route to the hospital. The clerk indicated that the surgeon stated "not even she had the power to make an exception; there were absolutely no exceptions to the new policy". She said that we must sign the release and pay "IN FULL" before any surgery would begin. Most importantly we wanted to save our poor sick dog but also since we had already paid the full diagnostic fees and half of the "Emergency Care" fees, we relented, signed and paid the full $3,500 surgical fee. The following day we were told that without the operation the dog would have been septic and likely died within 24 hours. She is now doing well. I strongly suggest that VRC staff get their stories straight or even more importantly, contact an over-nite printer and up date the payment policy on their surgery release form. My concern is: How many young families can come up with just under $5,000, on a moments notice, to save a loved family pet? Given 24 hours, I suspect most could make some kind of arrangements, but how many could "on the spot". Thank God my father accompanied my husband.