Computer Repair
Website Design & Development
Printing - Copies
Computer Sales
Computer Training
Licensing
No License Required for Trade
All statements concerning insurance, licenses, and bonds are informational only, and are self-reported. Since insurance, licenses and bonds can expire and can be cancelled, homeowners should always check such information for themselves. To find more licensing information for your state, visit our Find Licensing Requirements page.
Business Details 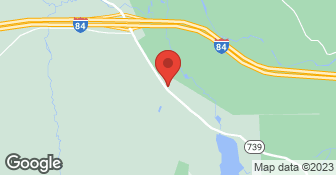 Computer networking and repair professionals, our mission at a+ on-site computer services is simple. Commercial or residential we are here to provide the customer with an affordable and practical computer networking and repair solution. Anything from hardware configuration to full network design and support, we work to provide you with a cost effective solution that not only makes sense technically but also financially. Many computer service companies only focus on one thing - that is achieving thier numbers without questioning quality of service. Our a+ certified computer technicians do not sacrifice quality service for volume. We work hard to provide you with a high level of computer and it support services to improve any small business or home office environment....

Carmichael Grafix, LLC is based in the Tampa Bay Florida area. We work with clients across the United States to create custom professional marketing materials, direct mail pieces, ads, and promotional products. We also provide print services. Let us be your Graphic Arts Department. Having problems getting the correct size images for your Social Media cover photos and headers? We can help with that too! DBE in Florida with USDOT. W/MBE Certification with the State of Florida, Hillsborough County FL. and City of Tampa, FL. Carmichael Grafix has been designated as an approved vendor of the Super Bowl LV Business Connect program. We are one of 200 local diverse businesses in the Tampa Bay area identified as a certified, experienced special event production company approved to compete for contracts related to Super Bowl.

10 employees. NVS Design is an innovative company that thinks so far outside the box, we're 2 blocks down the street from it! We are a strong, driven advertising agency located in Indianapolis that works to provide our clients with detail-oriented work that speaks for itself. You not only get a fresh new look, you get artwork that will make your competition envious of you. We offer a wide range of services to our clients. Whether you need a fresh new logo, or a hot new website, we will help make sure you stand out amongst the rest. At NVS Design you are our top priority! We work closely with our clients, so we can ensure their new design efforts will be a success. Additional email - chad@nvsdesigns.com.

He is such a crook and totally dishonest. Now I have no computer, as it totally crashed two days ago. It tried to complete 32,000 updates and just stopped. Because of him, I have no computer and most likely will have to go out and spend at least a couple hundred dollars getting it fixed, if not have to buy a whole new computer. Stay away at all costs.

DESCRIPTION OF WORK
I was having a problem with my computer. Every time I turned it on it would say windows was doing an update. This time it said it had 25,000 updates. I would wait about 45 minutes and it would get to 18,000 and stop. Then when I went to turn it off it would say it had to do more updates. I called Tommy, the owner, and asked him to clean it the way he had cleaned it for me last year, which he had charged me $50 for. I called him several days after I had dropped it off, and he said there was a problem with the fan and that it was running very, very hot. I asked how much it would be and he said he would check, and that he had two that may work. I did not hear from him for several days and finally called and he said I would just have to order a fan. I said I didn’t know anything about ordering parts and had him do it for me. More time went by, he finally ordered the fan, and said it would be $40 for the fan, and charged me $109 for the cleaning this time, which was more than twice what he charged me before, making it $150 total. It took 2 weeks total. When I picked up the computer, at the bottom of the screen, there was a message that said I was using an illegal version of Windows. When I had originally bought it, it was one month before Windows 7 came out, and if you purchased your computer within 6 months of that, you were entitled to the new version. I had called Windows, and received a disk, and had someone install it for me, but he had thrown out the disk when he cleaned the computer. Now it's saying I have an illegal version, and giving me all kinds of messages. Also, when I got the computer back, he changed all kinds of things around, my email was a mess, the cursor was going all over the place. Also, it wouldn’t allow me to change font or size,which Tommy changed without asking me. I was having all these problems that I did not have before. He removed the one icon off desktop that I did use, and put about 15 other icons that I have no idea what they are for on my desktop. I called him and said that I needed him to put the icon back, and tell me what other icons are, as well as change the font back, and the sound. We made an appointment for 2:30, but he was not there. The girl that works in his office was rude and said that she did not know if he would be in at all. I told her I would leave the computer, and would call him and go over everything over the phone. I got a call back from him asking why I had left the computer. I picked the computer back up, and tried to call him back, but he never called me. Meanwhile, the fan worked, but everything else was getting worse. The screen was getting blurry, and it was trying to load even more updates. I kept calling him to let him know that it was not fixed, and asked for help, but he never returned my phone calls.  I just lost $150, and he made everything worse.