Dentistry - General
Dentistry - Oral & Maxillofacial Surgery
Licensing
All statements concerning insurance, licenses, and bonds are informational only, and are self-reported. Since insurance, licenses and bonds can expire and can be cancelled, homeowners should always check such information for themselves. To find more licensing information for your state, visit our Find Licensing Requirements page.
Business Details 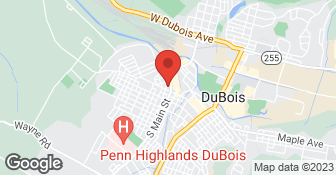 He should be reported to the licensing agency and his license pulled!

DESCRIPTION OF WORK
He had been my daughter's dentist when she moved back to the DuBois area so when I moved back I also used him.  He recommended that all of my old fillings come out because they were discolored which meant they were soon going to be an issue.  He made it seem as though I were in a toxic situation.  Each tooth either needed to have the white-type fillings or more appropriately all be capped because the fililngs were large they would need to be capped eventually anyway so why not do it now?... HMMM ... I did do the refillings but had an issue when I was away on business.  I went to a local dentist there that told me the refillings were unnecessary that even though they had discolored they were not poisioning me nor were they damaging my teeth.  The fact one of the teeth was not completely filled on the other hand was causing me pain. I have since completely switched to a different local practice and they confirmed what I was told by the out of state practice.  The fillings that were put in over the years should have stayed as was, there was no ethical medical reason for them to be removed.  He has also caused repeated visits for snafus for both my mother and my daughters.  They either have or will be changing to a REAL DENTIST.

The dentist is arrogant and very unprofessional, as is his staff. While working on me---in my mouth, with his tech beside him--- they were discussing, in very condescending terms, the patient who had just left. Another patient called to speak to the dentist. When the receptionist came in to relay a message to him, he again spoke in nasty, unprofessional tones about the patient who ws calling. Both...

DESCRIPTION OF WORK
I sought out this dentist for general dental care--fillings, crowns, cleanings.  The first few visits were not the best.  They are always running behind, talking about patients, not allowing patients to voice their concerns, etc, As for the quality of his work, the dentist told me outright that he represents "the standard of care in the tri-county area."  Yet some of the work he did on me caused significant bleeding and swelling, and I was forced to have repairs done by another dentist.   He also suggests treatments and surgeries tht are costly and not necessary.   I can assure you, there are several better dentists in the area.  Thankfully, I have found one who does excellent work in an efficient, professionally run office.