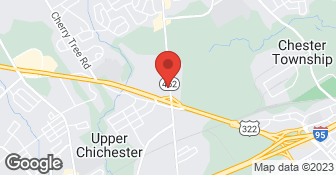 Custom Coats Painting “Where Quality and Customer Satisfaction Come First” is a full service, fully licensed and insured painting company, serving the Tri-State area. Our mission is to give you the best painting service at the best price and above all, do a job that exceeds your expectations. Our attention to detail and passion for what we do is what makes Custom Coats Painting a step above our competitors. Locally owned and operated by Brian McCarthy, who has over 10 years’ experience and a graduate of Rutgers University-New Brunswick, Custom Coasts Painting takes pride in giving the best possible service to each of its customers.

We specialize in custom picture framing. We also have framed art, prints, antiques, collectables, and decorative gifts. We also offer archival framing,shadow boxing, and frame restoration.Also all work is done on site, nothing is sent out. We are a family owned and operated business open since 1955. We accept visa, MasterCard, and discover. We offer lay away and we also have gift certificates available.

Owned and operated by the mother-daughter team of Kathleen and Irene Zoll. Zoll Framing and Gifts has been in business since 2006. We specialize in custom picture framing and calligraphy. Call us today for more details!

The bathroom looked attractive overall, although the painting and tile was sloppy. The shower has a bad leak so that water goes through the floor into the room below. We made many attempts to contact them to get this fixed, but they never got back to us.

I hired Elisio for an full siding job after and insurance payout for hail damage. I initially contacted them via Angie's email inquiring about their services and printed off a coupon. They never contacted me. I gave them the benefit of the doubt, assuming not all small companies are great about email, I called them about 2 months later. Initially everything seemed great. I spoke to the office rece...

DESCRIPTION OF WORK
Elisio was contracted for a full siding job, they failed to perform the entire job. They only did the initial rip and disposal of the old siding and delivered materials. They were fired after 3 weeks of non responsiveness/ non performance.

The job went well overall.  We caused some delays through being slow in selecting items and paint colors and then there were delays in obtaining items we specified.  One final delay was because the shower control handle we had picked was unavailable and the first replacement was not acceptable.  Because of these issues the job took considerably longer that either Elisio or we planned.  The actual ...

DESCRIPTION OF WORK
Elisio totally gutted and rebuilt our bathroom.  This involved removing and replacing interior walls, all cabinets and the tile shower stall.  They then rebuilt all of this including installing a vanity, granite vanity top, medicine cabinet, tile shower and new toilet and sink.

They were professional and polite but we didn't use them. We thought their pricing was too high.

DESCRIPTION OF WORK
I used Elisio Builders Pro to get an estimate for siding repair.

We had a guy that came to work, was squared away without doing it. When the inspector came, he had to make them stop doing it because it was not right, so they came back and furnished it up. Next time, we had some weather-related problems, so a lamp fell across the line and pulled the faucet and that was without incident. Then the next time, they did some demolishing and installed a stone, but the...

DESCRIPTION OF WORK
Elisio Builders Pro Inc. put up a portico over the back patio in 2009.