Gutters
Gutter Cleaning
Licensing
No License Required for Trade
Insured
All statements concerning insurance, licenses, and bonds are informational only, and are self-reported. Since insurance, licenses and bonds can expire and can be cancelled, homeowners should always check such information for themselves. To find more licensing information for your state, visit our Find Licensing Requirements page.
Business Details 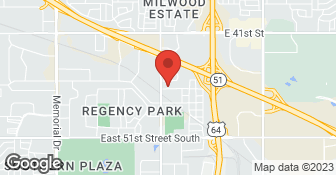 Visit our website: www.precisehomespecialties.com. Whether it's seamless guttering and downspouts, French drains, or exterior painting, our work speaks for itself. Customer satisfaction is our first priority, and it shows in our work. Our customer reviews have helped us win the Angie's List "Super Service Award" seven years in a row. We have from 2-4 top-rated, skilled people working at any one time with the owner carefully supervising every job to ensure it is done with detail and precision.

After the initial problem in scheduling, we got excellent results. The day after I left the review complaining that we had been waiting a month for someone to return our calls, Brad got in touch the next day to schedule and sent Richard out the next morning. Richard did a wonderful job.

DESCRIPTION OF WORK
They replaced a 50 foot piece of guttering that had fallen off with a single piece of continuous guttering. Once Brad finally got in touch to schedule, he sent a marvelous installer named Richard to do the work. It is a wonderful job and Richard is very pleasant, was on time, and completed the work well and quickly. There was just the initial month in which we could not get anyone to call us back for scheduling.

Experience was terrible. First of all Brad assured me it would be a professional job as stated on the estimate. He said they use stamped dropouts where the down spout meets the guttering. He said they don't cut guttering, bend down and pop rivet down spout to guttering.... That's exactly what they did ! I caught this after inspecting their work. Work was sloppy, poor quality, and looked terrible. ...

I am very picky about the color of my guttering matching, so I used a light color for the guttering and a brick color for the downspouts. Brad was very patient about my decision process and even made several extra trips to show me samples of the colors and of the fastening devices. His crew worked promptly and courteously and cleaned up their work area.

Gutter Cleaning, Gutter Repair, Gutter installation, gutter troubleshooting , we inspect and advise on all gutter issues. We can install any type of gutter. We also provide other architectural elements such as Leader -collector Boxes , rain chains , rain barrels . If copper gutters are something you are interested in contact us the possibilities are unlimited.