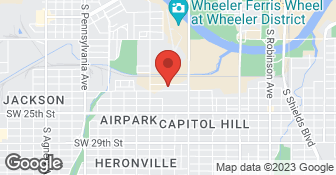 Full service septic system installation and maintenance company. We service builders and individuals, commercial and residential. We warranty all installations with service contracts available. We operate our own fleet of service and pumping trucks, serving all of Central Oklahoma.

My father located it in a couple hours without any additional equipment. I called to schedule a cleaning and asked if they could apply any of the $150 we already paid to the cleaning since I was calling them back. They said they don't do that. I decided to take my business elsewhere. No incentive to use them again.

DESCRIPTION OF WORK
Septic tank cleaned. They came out, were unable to locate the septic tank. Charged $150 for a service fee.

We asked Vets for a quote to pump the system and to get the trash lid installed correctly along with adding a riser to the trash tank so the lid would be above ground. Vets' quote for this was going to be a little over $900. We elected to call Foster's Septic for another quote. They responded immediately and we ended up using them instead. They replaced the aerator with a refurbished one (as they ...

DESCRIPTION OF WORK
Vets installed our septic system when the house was built and was recommended to us for service by the builder. We used them once before when the unit quit working 2 years after moving in. They serviced and replaced the aerator with a new one and also pumped the system. We were advised to have it serviced again in 3 years for a family our size. Two and half years later, the system again failed. As it turns out, when they responded, we found the system was way overdue for pumping (the rep said we should be having the system pumped at least every 2 years for a family our size versus the 3 years we were previously told) and the aerator had again failed. He also said the access cover to the trash tank was buried underground. We weren't aware there was another cover and we told him we would locate and uncover it for him before he returned to pump the system the next day. When we found and uncovered the lid, we found it wasn't secured at all to the trash tank and apparently never had been since Vets' initially installed the system.

They were supposed to come out to our home to give us an estimate to replace our lateral lines. My husband took off work so that he could be there when they came out. 30 minutes after the appointed time we called to make sure they were still coming out. The office said they would contact the person coming out. Another hour went by and still no one came. We called again and got the same response. W...

DESCRIPTION OF WORK
Absolutely nothing!

The survey was like a free estimate where they have to come out and give you the bid for the job and everything. We are having them come out and put in a new septic system but the weather is horrible so that is going to have to wait for a couple of weeks until the weather clears. The thing that stands out about them is that you can get a same day service with them and a lot of the septic companies...

DESCRIPTION OF WORK
Vets Septic Pumping Service came out in November to pump our septic tank and then they just came out probably within the last three weeks to do a survey to see where they are going to put in the new septic system.

My experience with them was fine. They did a great job. They came out even though it was snowing, cold and wet. So I was pleased. The employees that worked in this company were very professional.