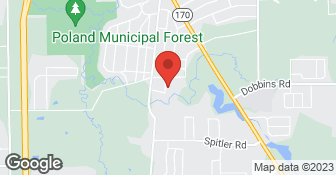 we are a 5 man amish crew specializing in all types of metal roofing. give reasonable prices. stand behind our work 100% & never leave an unhappy customer!

We have the experience and dedication to bring your dreams to reality! We guarantee your satisfaction, and we won’t leave until the job is done right. A+ with BBB. Angies List Certified. Call or click to schedule a free estimate today! EST. 2014/ Located in Canfield Ohio Free Estimates on all Projects. Fully Insured and Bonded

No one called me back after I left a voicemail. I then went with a different company.

DESCRIPTION OF WORK
I called them to come out to provide an estimate about replacing my roof.

Overall, it went great. The project took about three days from start to finish. It took a week or for Ed to respond once I decided which shingle to go with. But after that, work started and finished according to plan. I obtained several bids and his was one of the most reasonable and included quality product. He was very honest. I chose him due to Angie's List in the first place and was very satis...

DESCRIPTION OF WORK
Ed Begala replaced the roof on my 3212 square foot, ranch style commercial building. He was meticulous with his work and did not leave any nails or anything on the parking lot or grounds. The roof looks great. He was flexible with payment terms and allowed me to accompany him to the supply store to pay for the materials there via credit card so I could use a 0% offer through a card to finance the work which was great! I would definitely use him again!

He called me back the same day. It was snowing that day, so he came the next day, 1-3-08. He gave the roof an overview and gave me an estimate. We have 2 roofs that come together and there is a valley there, causing the leak. He quoted $750 and returned the following Monday to do the job. He had a worker with him, and they worked from almost 10:00AM to 3:00PM straight through. They found 3 leaks. ...

DESCRIPTION OF WORK
I had a leaking roof that needed repaired.

After a day long October rain I noticed a water stain in the family room of our 18-yr-old Tudor home. I removed a recessed ceiling light near the stain and could see the roof above, where there was a large black section of roof plywood indicating a leak. I got roof repair recommendations from neighbors and called 3 local firms, but every one went to voice message. Begala was the only one to return...

DESCRIPTION OF WORK
Ed Begala located a hole in the 18-year-old roofing that had developed due to a protruding roofing staple. As part of this repair, he removed shingles up to the nearby chimney and re-shingled and re-flashed around the chimney to improve the drainage. He cut out a 4'x4' piece of roof plywood that had rotted where the hole had been, installed a new piece and replaced shingles. Ed replaced a shingle on a different section of roof (12-12 pitch 20' high) where a center tab had blown off. He also replaced three 1x4 (2 -14' and 1-10') siding trim boards that had rotted since they were installed against the shingles along the roof, and repaired a 3 sq ft area of rotted siding board.