Snow Removal
Roof Ice/Snow Removal
Stone and Gravel
Rototilling
Leaf Removal
Lawn Irrigation
Licensing
No License Required for Trade
Bonded
Insured
All statements concerning insurance, licenses, and bonds are informational only, and are self-reported. Since insurance, licenses and bonds can expire and can be cancelled, homeowners should always check such information for themselves. To find more licensing information for your state, visit our Find Licensing Requirements page.
Business Details 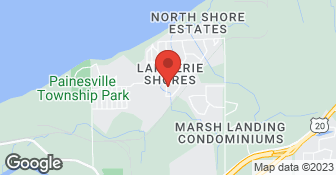 Ask us about our FREE computer generated design! Free estimates with competitive pricing for great work....

We service all underground lawn sprinklers . SINCE 1978.

Direct Office #440-379-7291 As a 2017 Super Service Award winner in multiple categories our service awards have exceeded what most companies acquire in only a few categories for the year. Zemco Roofing knows that roofing needs do not always mean having to buy a new roof! In fact, we have found our niche in the roofing industry in the maintenance and repair of your roof – all the way from the gutters up! We pride ourselves in finding economical, competitive alternatives to needing a total roof replacement for our customers, saving them money & stress, however when your roof has reached its life or incurred storm damage Zemco also provides outstanding new roof installation! Since 1997, we pride ourselves on Integrity, Honesty & Reliability as our BBB accreditation affirms! We take the time with each of our customers to find the best options for their needs. We establish & maintain long term relationships with our customers. Zemco can provide anything from a brand new roof to a simple gutter cleaning or anything in between! We would love the opportunity to partner with you for all of your roofing needs. Please note, real estate transactions may incur an additional fee that will be fully credited if Zemco is hired for the work completed. Call us today to explore your options!

DESCRIPTION OF WORK
I contract Matt Wiegand to put in a french drain, change the pitch of my yard and put in a paver patio.  We started with the bids fall 2011 and ran out of time to get it done until spring 2012.  I was suppose to be his first job of the year, but he did not start it until May 2012.  He dug up my entire side yard to put in a french drain, put in a patio and was suppose to install a gas line to the new gas firepit.  He did not complete it until sometime in August.  He tied the drain into my house footers, which is not suppose to happen.  First rain, water poured into my basement and it flooded.  Matt came out, reluctently, said he would get a plumber the following morning to my house.  This was at 5 PM and water was still pouring in from the foundation.  I had to call a plumber and get it fixed myself.  The new contractor found the drain tied to the footer drains, the electrical hookups outdoors were not outside wires, the french drain was not tied to any drain and the list goes on and on.  Will be curious if any of the new plants are alive this spring.  Terrible experience.

First of all we started discussing the project in the fall of 2011. Sharon had plans drawn up by an architect. She told me at that point that she would like to do the project first thing in the spring. In February I started calling to follow up with her about the project with no response. I sent her an email about the project ( I wish I could attach it ) asking her if she still wanted to go ahead ...
C

Matt was prompt and professional when we engaged him for an estimate in December of 09 to quote the work.  He gave us a very attractive price, we did not even feel the need to consult with other companies.  Over that winter, he and his team moved our Playset from our old home to it's current location.  During the spring of 10, he and his crew began work on our landscape.  They struggled with wet c...

DESCRIPTION OF WORK
We had a new home with no landscape.  Alternative took a Landscape design put together by a different company and installed the beds, patio, turf, plants and mulch as described in the plan.

Hi this is Matt Wiegand with alternative landscapes and I would like this opportunity to tell my side of this story. First of all when we began the job we did struggle with very wet conditions and there was no final grade on the property along with standing water which made conditions much worse . We even went as far as to rotitill the entire backyard just to try to get it to dry out so we could g...
F

Originally I phoned alternative landscapes in May 2011 for an estimate on a spring cleanup and weeding. Spoke with matt, and he explained to me because of all the rain this spring, his business was behind with his regular customers and it would be awhile before he could commit to us. I told him not a problem, I understood because of all the rain it might be awhile. Matt did stop by within a few d...

DESCRIPTION OF WORK
No services were performed. No apologies were made, no rescheduling was mentioned.