Basement Waterproofing
Foundation Repair
Wells and Pumps
Home inspection
Stone and Gravel
Drain Pipe Installation
Concrete Pouring and Repair
Masonry
Flooring Sales and Installation
Drain Cleaning
Air Duct Cleaning
Water and Smoke Damage
Plumbing
Licensing
No License Required for Trade
Bonded
Insured
All statements concerning insurance, licenses, and bonds are informational only, and are self-reported. Since insurance, licenses and bonds can expire and can be cancelled, homeowners should always check such information for themselves. To find more licensing information for your state, visit our Find Licensing Requirements page.
Business Details 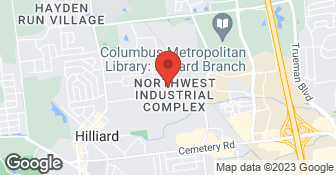 Full service company. In business for 35 years! Entered the Central Ohio Market in 1983. All work done by hand and no sub-contracting! Lifetime, transferable warranty. Full Financing available including 12 months same as cash with no payments to qualified buyers! Senior and military discounts. 10% off (up to $500) for all Angie's List members. Members of: NARI, BIA, BBB, Basement Health Association....

Heritage Home Inspections is a Certified Home inspection business. We are family owned and operated, located in Licking County, Ohio. We are here to help your family make an informed decision about one of the biggest investments in your life. We perform a complete and thorough home inspection providing you with a full evaluation of all accessible components of the home. This home inspection includes an objective visual examination of the physical structure and systems of the home you are considering, from the roof to the foundation. If you are in need of a home inspection in the Central Ohio area, Heritage Home Inspections would be glad to help. Your home, your heritage.

Experience and Expertise: Our team has been engaged in restoration, remediation and the cleaning of HVAC systems for 18 years and has managed some of the largest air duct cleaning projects in Ohio : What our customers can expect from us: We will conduct an inspection of the system PRIOR to performing any work and alert the consumer to any problems, as required by the current NADCA ACR Standard. We offer up front pricing so that there are no surprises (like other company's do) We do complete system cleaning only, using source removal practice.

Very smoothly from meeting with Jerry Schieve & getting a free quote. To confirming the job, Q came and hooked up the E Z Breathe. The next day Aaron & his crew showed up @ 8:15, I was told they would show up between 8-9 so that was great. Arrived with 5 guys if I’m not mistaken by the end of the day they had at least 10-11 men working, now that’s what I’m talking about. And with all that they fin...

DESCRIPTION OF WORK
Had my basement waterproofed,

They were very professional. They got the job done in four days which was originally going to be 4-5 days because of the rain. They handled issues they encountered which they did in an efficient way. We did financing with one of their partners. Some time before the service started we had to make some changes to the contract which they did rapidly and effectively.

DESCRIPTION OF WORK
They did both an inside and outside system to remediate having water coming into our basement. They also installed an air pumpsystem in the basement.

It didn't go. The day before the scheduled meeting, we got a call from the company DEMANDING that both my wife and I be there together. When I said only I would be there - the woman on the phone persisted, I said so that it would only be me. She kept prattling on and I asked, "So if my wife isn't going to be there - you're not coming?" She again insisted we want you both there. That was it. They w...

Beware, if you hire Everdry items from your house may come up missing. We had an engagement ring, 25 Anniversary ring and a 35 Anniversary Ring stolen while Everdry crew was in our house. Other then the house owners, Everdry people were the only ones in the house when the rings were taken. All employees denied taking the rings, as would be expected. The companies response was that this was not the...

Horrible. Also learned that Everdry does not and will not repair or reimburse from damages caused by their systems failure to perform, or their guarantee to fail. Any structural damages a homeowner is forced to undertake themselves will not be reimbursed!!! Also....the little "Arbitration" clause in their contract prevents the homeowner from litigation so you cannot recover for damages. Scare tact...