Drain Pipe Installation
Fencing Driveway Gates
Fencing
Mulch and Topsoil
Lawn Fertilization & Treatment
Lawn and Yard Work
Hauling
Decks and Porches
Concrete Pouring and Repair
Gutters
Landscaping - Lighting
Roofing
Licensing
No License Required for Trade
Bonded
Insured
All statements concerning insurance, licenses, and bonds are informational only, and are self-reported. Since insurance, licenses and bonds can expire and can be cancelled, homeowners should always check such information for themselves. To find more licensing information for your state, visit our Find Licensing Requirements page.
Business Details 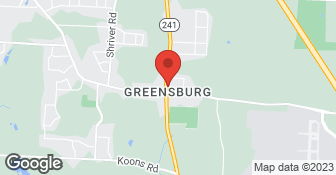 We are a very reliable, responsible landscape construction company with 5 employees. We offer free estimates and of course the cost is determined by the type of job requested. We can perform a variety of work, so just ask. No travel charges. We are a member of the Better Business Bureau and have over 20 years experience. References and photos of recent work are available upon request. We are certified concrete paver installers. The owner of the company will meet with you in person to go over your project. Give us a call - we look forward to working with you. Thanks....

I am a local landscaper. I specialize in mulching, hedge trimming, lawn mowing, leaf cleanup and more! I offer competitive pricing and provide you the quality, honest, and proven work that you deserve.

We install Under Deck Ceilings underneath elevated decks to make a nice dry, bright living space . We can add lights and fans during the installation. This area can also be used for storage.

Clink Builders was established in 1969 and is proud to have given years of customer satisfaction and quality performance. We are family owned and operated. We are fully insured and bonded. We obtain all required permits and licenses. Proud members of Angie's List. Covered by Ohio State of Workman's Compensation. Also a proud member of member of ASCA - American Society Consulting Arborist Our Philosophy is we can continue to expand and grow one satisfied customer at a time.

Let me start by saying I would certainly hire Dave & BHW again in the future... I called Dave to request an estimate in late May. Dave was available within the week to come out and take the measurements to provide an accurate estimate. We requested one estimate to replace the wall with wood and a second to replace it with stone. We received his estimates on June 1. His estimates were detailed and ...

DESCRIPTION OF WORK
We had to have two wooden retaining walls, with a set of stairs between them, removed and replaced. The walls and stairs were put in by a previous owner and had rotted to the point that the wall would not last much longer. They installed the wall as well as base and drainage as well. We did not contract them to redo the landscaping on top of the wall. We did that ourselves. Additionally, we had a new 9'x7' paver stone patio put at the base of our deck's steps. Unilock products were used for both the wall (Pisa2) and Patio (Beacon Hill Flasgtone) in their Sierra color.

Dave did a great job. He was easy to work with & very fair. He actually told me I did not need as much mulch as the other bids suggested since mine was still in good shape. Just a light refreshed layer. Even though it lowered the price on his end, he was more worried about doing what was right. You do not find that much these days. The mulching, edging, and trimming looks wonderful. He is a super ...

Not well since they did not respond.

DESCRIPTION OF WORK
Called for a quote on what turned out to be a $4,000 landscaping job and said he would be in touch to give quote and never called or set anything up. Went with another local who was prompt and gave a quote in a couple of days and actually acted like he wanted to do business

The design and quality of the wall was outstanding.    While it was a large investment, it was done by Jim with great care and extra materials that could have been excluded and never noticed by me.     I purchased the stone separately, but Jim and Dave were very cooperative in unloading the materials and completing the work.

DESCRIPTION OF WORK
Installed a barnstone retaining wall.   This was a 100 foot long by nearly 10 feet tall wall.   They removed the existing stone wall and used this stone to create landscape borders around trees and flower beds.

Dave was going to send Jason out to seal the sidewalk after it was done, but he never came out. Promised he'd be there the next day. Sidewalk was two different colors because they ran out of concrete. Had to run to Home Depot to get more. One part of the sidewalk is really light and the other is dark. I was told rebar was going to be used and it wasn't, Sidewalk looks good, I  just don't know how ...