Claggett's Fix It All LLC 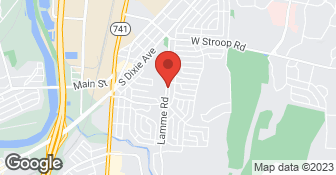 Owner-operated. No subs. Cost is determined by the job. Extra charge for after-hours service. May contact through email or phone....

Living Comfort Heating Cooling and refrigeration is a trusted contractor serving residential and commercial properties throughout South Western, OH. From routine maintenance, repairs, and installations, to around-the-clock emergency service, count on us to get the job done right. We value our customers and look forward to keeping your family and office at the perfect temperature year round. Contact our office today to schedule your appointment @ South 513-833-3876 - North 937-528-9778

The Patch Boys of Montgomery County

The Patch Boys of Montgomery County is proud to be a locally owned and operated business. We specialize in restoring homes to their beautiful originality. We have mastered an award-winning process to rapidly patch up all of your holes in your home and restore it to its uniqueness within hours, for most jobs. Call us today to learn more! We are passionate, we have a proven record of accomplishment, and are a reputable company with locations across the nation. We ensure that all projects are done with utmost professionalism using only qualified individuals. For us, honesty is the only policy and we strive to complete all projects with integrity and fairness. When you allow us into your home, we don't take that lightly; we treat and respect your home just like we would our own homes. We use the best of technology and tools to ensure that all jobs are done quickly but also giving attention to detail.

We have used (and continue to use) Claggett's for a variety of property maintenance and repair work. Don is professional, prompt and very competitively priced. He is very trustworthy and knowledgable.

DESCRIPTION OF WORK
Provided basic maintenance and repairwork to prepare a small commercial space for a new tenant.

Everything went smoothly from start to finish. Limited out of service time.

the gentleman was friendly and knew what he was doing. He was neat and clean and did not leave a mess

In each project the service person arrived in a timely fashion, was skilled in the areas needed. Performed work efficiently with minimum interuptions for parts chasing. Certainly well satisfied and fully expect to use this company as future needs arise.

I repeatedly asked CFIA to provide me weekly with a few photos of the completed work - as clearly stipulated in the contract. After much pleading finally on Dec. 28 - one month later - they sent me pictures (plus same photos on CD via reg mail) of what I hope looked like the completed back porch, some electrical work in the laundry room/basement and some small improvements they made to the first c...

DESCRIPTION OF WORK
Very disappointed with Claggett's Fix It All. Claggett's Fix It All apparently has abandoned my rehab project after I paid them over 6K of the agreed upon 12K contract total amount. My property manager has reported to me they have only completed 10% to 20% of work contracted thusfar. I hired them to complete a project which my first contractor, who originally sold me the duplex, left. Attached are contract/invoices. I am a long-distance REI. It took my first contractor six months to rehab only one apartment of the duplex. She then abandoned the project without completing the second apartment. She has since pulled down her website from the internet and seemingly has left Dayton. When I was recommended by my best friend's daughter to try Angie's List I thought it would be a helpful tool to finding a good contractor in Dayton. I checked Angie's List. Because of their Angie's top "A" score in October/November, I hired Claggett to complete the duplex, confident that they were honest. I checked further and they also had an "A -" Better Business Bureau rating and had been in business for over five years. With Claggett's Fix It All - from the start - their worst fault was COMMUNICATION. It was and is terrible and initially they always had an excuse for not calling. For the last five weeks Claggett Fix It All has not communicated at all with me on this open project and has not responded to my phone calls. I am desperate. My property manager did manage to reach Don Claggett this week - only once, thereafter he also could not contact him. He said Don Claggett stated he is now "...out of the business" and that "...his brother is handling the job". Here is the timetable on what has transpired so far: On 11-21-08 I signed attached contract with Claggett's Fix It All. They committed to be completed by Jan. 7. I paid a 4K deposit upfront. First day on the job they called me and stated that the power was not on and we worked together with Dayton Power & Light to get that corrected. Right away they stated the project would be late because of this. I understood and was agreeable.

Claggett's Fix It All, LLC after many attempts with client was unable to complete any type of resolution. What is clearly not stated in full detail are the additional expenses that occurred before we could actually start work. Also, Claggett's Fix It All, LLC went out of it's way to ensure the power and gas was turned on at property. We not only paid out the monies given the large outstanding bala...