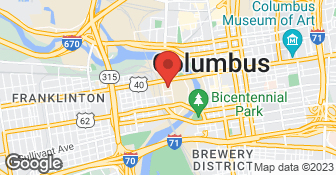 DLL Landscaping & Tree Service proudly serves Columbus and all of Central Ohio. Let our licensed and fully insured Tree Care Professionals assist with your Tree Care needs including: Tree Trimming & Removal, Stump Grinding, Tree Bracing & Cabling, and Tree Replacement. Whether it's property beautification/enhancement, removing a fallen tree or taking the preventative measures to protect your property, our experts are here to lend a hand.

This company came to my door seeking work. Normally I don't use door to door services because the outcome can be disastrous. However, my crabapples were well trimmed and they did what they promised. I did need to call Brandy Cochran to get promised work done. She was terrific and told her workers if certain work was promised, it was to be done! And it was!

DESCRIPTION OF WORK
Trimmed shrubs and trees in front home. Removed one tree. Took out dead wood from trees in back of home.

There are two parts to this evaluation. The crew was great, they worked hard and steady. The owner, Richard Murray, HOWEVER, is NOT TO BE TRUSTED. I made the mistake a paying for the job before it was completed, as they promised to return the next day to finish. As of September, the work agreed to and payed for in mid-June has not been completed. Richard has "promised" to finish the job on 5-6 dif...

He trimmed the trees fine but left a huge crack on the side walk, from the weight of the cart that he was throwing the branches in, and refused to fix it.

DESCRIPTION OF WORK
Trimmed 4 or 5 trees near the house, and hauled away the clippings.

They returned the next day to get the limbs and only took a small amount of them. They told me they would return to finish the job and never returned. I called them for 4 days straight and was told they would return, but never did. They were paid the first day.

DESCRIPTION OF WORK
Trimmed dead limbs out of big maple tree in our back yard. Agreed to remove debris from my yard and neighbor's yard.

They did not complete the work and have called them 4 times and they have not come back. The bush trimming and shaping was very sloppy.

DESCRIPTION OF WORK
Tree trimming and removal of bushes.