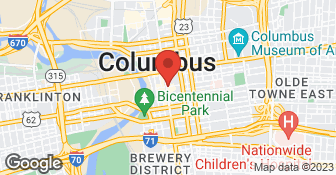 Owner operated. No subs. Cost is determined by the job. No travel charges. No service fees. May contact through e-mail.

Jones Topsoil was incorporated in 1924 under the name Jones Fuel Co. 2015 is our 91st anniversary. We sold residential coal for home furnaces in the Columbus, Ohio area. As natural gas became the fuel of choice in the 1950’s we began hauling topsoil, sand and gravel, and limestone for contractors and homeowners. Although our corporate name is still Jones Fuel Co., we do not sell any fuel. Our topsoil has always been of the highest quality because we normally strip topsoil ahead of gravel operations. Our soil is called “sandy loam” topsoil and usually comes from along Franklin County Rivers and streams. We sell three types of topsoil. SoilPlus, which is a blended topsoil, and can be delivered with our Slinger Jones trucks, is normally used for flower beds and gardens. Pulverized topsoil is our rich topsoil run through a large grinder and made easy to work with and spread. That soil is used to level out lawns and fill areas that need built up with soil. Our regular, un-pulverized topsoil is used to fill deep holes, or when the customer is using a skid loader to spread the topsoil. We also sell and deliver high quality mulch, sand & gravel, and limestone products. Because we have so many trucks, we are normally able to deliver on the same day as the order is placed, and normally within a few hours. 40 Employees. Uses subs. Cost is determined by the job. Travel charges apply. DBA Jones Fuel Co. Previous contact - John Jones. Award winning. Additional phone - (800) 867-7645.

We take pride in your curbside appeal. Our service area includes New Albany, Gahanna, Blacklick, and Reynoldsburg. We are a locally owned and operated company that has been in business since 2008. Your complete satisfaction is our mission. Give us a call today and speak directly with the Owner.

Have you hired Absolute Property Maintenance And Lawn Care? Be the first to share your experience and help other people looking to hire this Pro.