Garage and Shed Building
Masonry
Concrete Pouring and Repair
Concrete Driveways
Licensing
Bonded
Insured
All statements concerning insurance, licenses, and bonds are informational only, and are self-reported. Since insurance, licenses and bonds can expire and can be cancelled, homeowners should always check such information for themselves. To find more licensing information for your state, visit our Find Licensing Requirements page.
Business Details 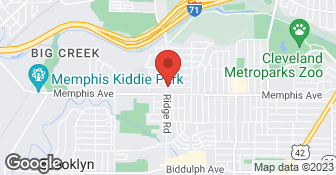 6 EMPLOYEES. USES SUBS AT TIMES. NO TRAVEL CHARGES. COST IS DETERMINED BY THE JOB. ASK ABOUT ANGIE'S LIST DISCOUNT....

Family owned business almost 50 years, myself with over 30 years of experience. We have worked on many historical buildings and structures in the Cleveland area, including repair and restoration. Concrete only when doing a masonry job. Call today for your masonry needs and free quote!

Check our website for current promotions. All major credit cards accepted. Sub contracting not an option. We won't show up for another company, and only WE will show up to do work on your home. No surprises.

They sent me a letter saying that they had already ordered the majority of the materials for the project and that we have to pay $7,455 for the materials or they will be a lien on our house. The estimate paper is very tricky with the wording, it is difficult to understand. We had 2 estimates afterward and the estimates were much more clear.

DESCRIPTION OF WORK
I contacted them to get an estimate to replace our one garage that had been damaged by a tree with a 2 car garage. The guy came once to give the estimate. My husband signed the acceptance, which he thought was for the estimate. The estimate was for $21,300. They were also going to replace the driveway. They called us and I told him we didn't have all money yet, we still were trying to get a loan. We got another estimate from another company which was a lower price and we decided to use them.

They wanted to be paid a while before the job was finished. The work was mediocre and they messed up portions of my neighbors yard. I would not use them again.

DESCRIPTION OF WORK
They put in a concrete driveway for me.

Came for estimate, estimate way too high, even after lowering when I told him I had a lot lower bids, he then "recalculated".

DESCRIPTION OF WORK
Did not get job, estimate way too high, this was for a 20x20 vinyl garage with tear out of existing garage.

SPOKE WITH SOMEONE ABOUT SETTING UP A TIME FOR AN ESTIMATE. IT TOOK SEVERAL CALLS BACK AND FORTH BEFORE WE ACTUALLY MADE CONTACT. WHEN I DID SPEAK WITH SOMEONE THEY SET UP A TIME TO SEE US. THEY CALLED BACK TO CONFIRM 2 HOURS BEFORE THE SCHEDULED APPOINTMENT BUT NO ONE SHOWED UP. WE HAVE NOT HEARD FROM THEM SINCE THIS INCIDENT. I WOULD DEFINITELY NOT USE THIS COMPANY IN THE FUTURE.

THEY WORKED QUICKLY AND EFFICIENTLY, TOWARD THE END OF THE PROCESS, THE OWNER WASN'T AS RESPONSIVE AS BEFORE HE HAD BEEN PAID.